Home > News > For Sale: ‘The most troublesome car I’ve had the misfortune to waste money on’

For Sale: ‘The most troublesome car I’ve had the misfortune to waste money on’ 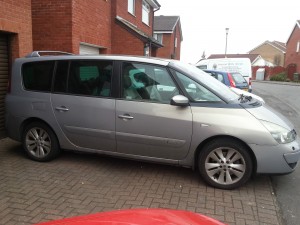 WE wouldn’t recommend a dealer advertise a car for sale in this ‘innovative’ manner like this eBay seller has. However, it does make for interesting reading…

The ad for a 2003 Renault Grand Espace forgoes the usual ‘good condition for its age’ and ‘sad to see it sold’ cliches – instead being sold as ‘the most troublesome car I have ever had the misfortune to waste my money on’.

‘I think I’ve owned it for just over two years, although it seems much longer than that,’ the eBay listing reads. ‘It’s been used predominantly for the school run, so is festooned with crisp bags, feet marks, finger prints and a variety of indescribable things stuck to the carpets.’

As though the 3.5-litre V6 Espace’s lack of cleanliness wasn’t enough to put buyers off, the seller – mamstaxi – goes into bitter detail about just how much money has been spent keeping the seven seater on the road.

‘New starter motor, £575. Laughable French pricing,’ the list starts. ‘New alternator, which is now broken and fries batteries until they explode. New key, £250, only to find that the old key was fine and that it was the key reader, at £350. Hence the old bus has two keys and Renault win £250.’

If the seller’s resentment towards Renault – and indeed the French car industry in general – wasn’t immediately clear, the ad continues: ‘I am selling it now as I refuse to support the French economy any longer by buying things from Renault, who incidentally are hopeless.

‘They recommended a ‘good run out to charge the battery’. They then increased the French economy by 80 quid in return for switching off the light with their French super-computer. So, off we set for a ‘long’ run to the mother in law’s, during which the alternator began producing 18V, set off every light, buzzer and fault warning under the sun, and also blew up the battery.’

It’s not all bad news, though. The Grand Espace comes with four nearly new tyres, has a full leather interior (still manually adjustable because ‘they do not have stupid French electrics’), and even rear parking sensors ‘which work fine once you have reversed into whatever is behind you’.

There’s a day still left to bid on the spares-or-repair Espace, with buyers even invited to drive the car home if they so desire – provided they don’t mind a few explosions on the way. Thanks to the dodgy alternator, the seller suggests, ‘either the car goes in to limp mode with a dashboard lit up like the Griswold’s Christmas tree, or your battery will get too many volts shoved up it and eventually mimic a sulphuric acid spewing balloon.

‘I should list some good points about the car, but there aren’t any. Cash only.’