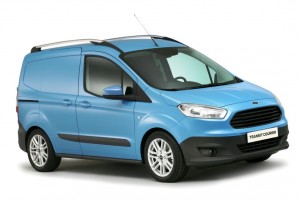 FORD has revealed details of its new Transit Courier – a Citroen Nemo-sized van based on the Fiesta.

Sitting in between the smaller Fiesta Van and larger Transit Connect, the Courier marks the second most compact van in the range – and completes Ford’s four-van lineup.

Inside, much of the Courier’s interior is lifted straight from the Fiesta, meaning that clever technologies like the firm’s SYNC system are available, while buyers can even opt for a rear-view camera to aid parking.

Engines are carried over from its supermini brother too, with both the new 1.0-litre EcoBoost petrol and 1.5-litre Duratorq diesel engines available, along with a 1.6-litre petrol combined with an automatic gearbox.

Ford says that the Courier is also the most spacious vehicle in its class – with a long load length of 1.62 metres, and features like a fold-down passenger seat with an optional mesh bulkhead to help carry loads of up to 2.59 metres in length.

Loading is said to be easy too, with sliding doors either side to get items in and out of the Courier, while there are ‘multiple pre-installed bodyside fixing points’ for mounting racks and framework inside.

‘Ford has now completely transformed its commercial vehicle line-up, with four all-new, class-leading Transits for European customers,’ said Barb Samardzich, vice president, Product Development, Ford of Europe. ‘With the all-new Transit range, we expect sales to grow to 400,000 units per year by 2016, well over 50 per cent more than we sell today.

‘With 10 per cent more load volume and floor area than its closest competitors, the all-new Transit Courier brings a new level of productivity to the compact van segment. This is a stylish, practical and affordable new van that businesses will value for its agility and exceptionally low cost of ownership.’

The Courier will go on sale in spring 2014, alongside a new high-roof version of the Transit Custom.