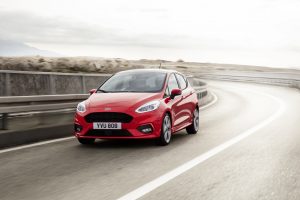 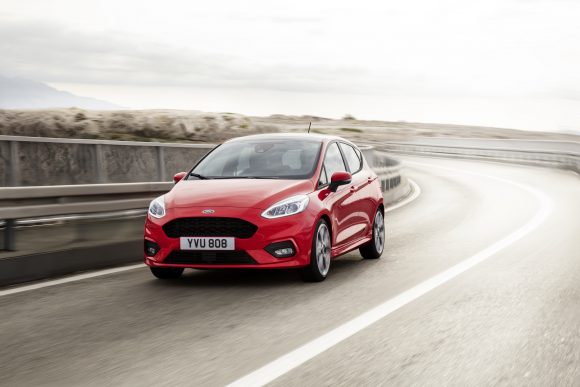 The manufacturer is bringing back a base-model Style trim – a car that was deleted from the last generation line-up – slashing the entry model price of the UK’s best-selling car, which is currently on sale in dealerships from £13,795.

A spokesman for Ford said: ‘The Fiesta has been the best-selling car in the UK for eight years in a row and we are confident that will continue with the new model. By reintroducing the Style trim we’ve been able to make the Fiesta even more attractive.’

At the other end of the scale, Ford will introduce a posh Vignale model to its Fiesta line-up for the first time – a model that will cost more than a Focus.

In pricing details, released ahead of the Fiesta’s official debut at the Geneva motor show tomorrow, the firm revealed the top-of-the-range Vignale will weigh in at £20,575 for a 1.5-litre TDCI. A Ford Focus with 1.0-litre EcoBoost engine costs £19,495.

The B&O Play series – on Zetec and Titanium models – have special interior and exterior colour schemes of mint and copper, while the B&O Play system will offer an enhanced audio system with 10 speakers and a boot-mounted sub-woofer. It also boasts an eight-inch floating tablet-inspired touchscreen. They start at £15,165.

The most popular model will be the £14,215 Zetec, which currently accounts for 58 per cent of sales. This comes with 15-inch alloys, Quickclear windscreen and the SYNC 3 DAB radio system with a 6.5-inch touchscreen. Apple CarPlay comes as standard.

‘With so many new Fiesta faces coming this year, including B&O Play editions for music lovers and the luxurious Vignale execution, the Fiesta is set to stay at number one,’ said Andy Barratt, chairman and managing director of Ford of Britain.

Prices for the sporty Fiesta ST model – which will feature a new 200bhp 1.5-litre EcoBoost three-cylinder engine – will be announced in the autumn.

MORE: Small drop in registrations for February ‘but market will bounce back’

On SuperUnleaded.com: Ultra-Rare Deltawing Race Car Goes On The Market