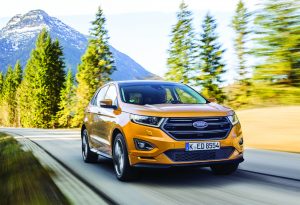 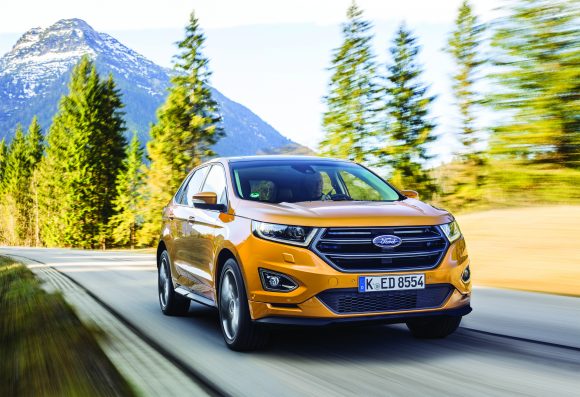 Ford’s new large SUV, the Edge is a big, chunky crossover that looks American with good reason. It’s from the One Ford school of producing cars to slip into any market. The Edge joins the Mustang as an American market vehicle now offered to European customers.

The European choices are diesel or diesel. Although Ford doesn’t offer a diesel Edge in its home market, this side of the Atlantic we can choose between the 180PS and 210PS versions of the 2-litre ‘Duratorq’ TDCI diesel engine. The lower-powered version has a six-speed manual gearbox, while the 210PS model gets a six-speed dual clutch automatic. All models have Ford’s intelligent four-wheel drive system.

This is where the Edge majors. From the entry level Zetec model, every Edge gets automatic lights and wipers, keyless

start, DAB radio with a colour touchscreen and reversing camera and safety assists like lane-keeping, emergency city braking and traffic sign recognition. Ford reckons only around two per cent of buyers will go for the £29,995 Zetec, with a near 50:50 split for the Titanium and Sport models. These gain goodies like acoustic glass and a touch-free tailgate, with sports suspension and active steering on the Sport grade.

Big. Very, very big. On normal roads it’s sobering, with a few sharp intakes of breath when the going gets tight. The weight counts against it and with only 208bhp to hurry you along there’s little sense of acceleration — though the 177hp manual alternative loses only half a second on the 60mph ‘sprint’ (9.4s to 9.9s). With the Sport, adaptive steering is standard but we prefer the more natural feel of the ordinary model. Off-road the car’s intelligent all-wheel-drive system coped with a little light mud duty but on the large 20-inch wheels and road tyres it moved about enough to suggest that harsher terrains might be best left alone.

Autocar says ‘it’s bigger, more refined and better equipped than its rivals’. AutoExpress remarks: ‘Edge looks the part and is packed with kit, but you need much more than that to challenge in this competitive class.’

It’s not terrific to drive thanks to the weight and size. As a cruiser it’s comfortable and you get plenty of room and equipment for the money — you might buy an X3 for the same price but you’d need to throw thousands at the options list to match the Edge. It’s a good-looking beast, but whether you can admire  it on your driveway depends on whether it would fit there.