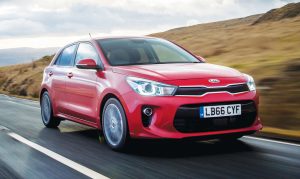 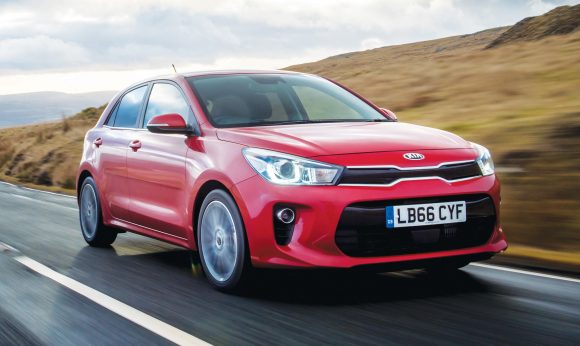 As Kia’s best-selling car globally, the South Korean manufacturer has high hopes for the new fourth-generation Rio. The popular supermini now boasts a more grown-up aesthetic, including Kia’s signature ‘tiger nose’ grille that will also appear on the hotly anticipated Stinger GT, a revised engine range that includes the firm’s 1.0-litre T-GDi petrol unit (which is being offered for the first time in the Rio) and greater connectivity features, to name but a few updates.

The new Rio is available with a selection of three petrol engines and one diesel engine. At launch, we tested the 1.0-litre T-GDi

petrol powerplant in both 99bhp and 118bhp guises, as well as the 1.4-litre CRDi diesel in the 89bhp state of tune.
Of the three tested, our pick would likely be the 1.0-litre petrol with 99bhp and the five-speed manual gearbox. The difference in performance between this and the 118bhp unit is negligible, it has a claimed economy figure of 62.8mpg  and CO2 emissions stand at  102g/km. As the 118bhp unit is only available on the First Edition Rios, the less-powerful petrol is also far more affordable, with prices starting at £14,545.

Customers will be able to choose from four levels of specification, logically named ‘1’, ‘2’ and ‘3’. Prices for the entry-level 1-specification cars start at £11,995, while the top-level 3 models start at £16,295. At launch, Kia will also offer the Rio in a limited run, ‘First Edition’ specification, which gains features such as 17-inch alloys, keyless entry and LED rear lights. It also features a more powerful, 118bhp version of the 1.0-litre T-GDi engine. First Edition cars cost £17,445.
Flagship First Edition cars feature a sporty red and black two-tone colour scheme, leather seats and a seven-inch touchscreen infotainment system that dominates the centre of the dash. Build quality is sound, and while there are a few smatterings of cheap, horrible plastics around the place, it’s largely a tidy place to sit.

While the new Rio may not be as fun or exciting to drive as the current Fiesta, it certainly makes a solid case for itself. On the road, it is incredibly tidy. A new suspension set-up and stiffer body lend themselves to greater composure through the corners, without ruining the ride on uneven surfaces. In fact, the Rio deals with the often shocking British road network remarkably well.
Both of the 1.0-litre T-GDi engines that we tested were punchy and responsive, and are more than capable of getting the car up to speed in a fashionable manner. An added bonus is the fact they are both impressively quiet at motorway cruising speeds, too. Well done, Kia. Another aspect of the Rio that Kia has really nailed is the controls. The manual gearboxes are slick and precise, while the steering set-up offers a pleasing combination of weight and feel.

The Daily Telegraph said: ‘The Kia Rio might not be the most fun car to drive in its class, or as comfortable as some rivals, but it scores well in most other areas, whether it’s in the space on offer, the low running costs, excellent reliability record, or value for money.’ Auto Express weighed in with: ‘In isolation the new Kia Rio is a capable supermini. Unfortunately, it’s entering a market with many excellent competitors that beat it in virtually every area, so it’s a tough one to recommend.’

All up, the new Kia Rio is a competent car. It certainly won’t put a smile on your face in the same way a Fiesta might, and it can’t compete with the likes of the Honda Jazz in terms of practicality, but it gets the job of being a car  you can depend on done with ease.