Former Pendragon CEO Trevor Finn has been appointed as a non-executive director of Hedin Group AB, just as the Swedish business has acquired all shares in Ford Motor Company’s Swedish subsidiary.

In a LinkedIn post, Finn said: ‘I am pleased to join the Hedin board as non-exec director working on our first Superdealer.

The deal includes 74 dealers in Sweden and means the group, under the name Hedin Motor Company, will be sole importer and distributor of Ford vehicles in the country.

In effect, it becomes a ‘superdealer’, a concept trumpeted by Finn, whereby the dealer group has a stronger alliance with the OEM. 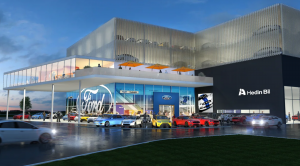 In a press release, owner and CEO of Hedin Group Anders Hedin said: ‘As the distribution channels in the automotive industry drastically change around the world, Ford has turned to Hedin Group as a partner that fits perfectly with Ford’s high ambitions to succeed in Sweden.

‘With the acquisition, Hedin Group offers a solution where the importer himself is also an important player as a reseller.

‘By simplifying and streamlining operations, we create a clear offer to the market and we can use the experience from being a leading retailer to understand the market and customers’ needs and expectations.

The idea of running a leaner distribution model is very intriguing. It’s very significant in the context of where retailing is going.

‘We will invest in strengthening the Ford brand. We have the ambition to be a leader in the rapidly growing digitalisation of the industry that enables a more multi-channel way of selling.’

‘The idea of running a leaner distribution model is very intriguing. It’s very significant in the context of where retailing is going.’

After leaving Pendragon in March 2019, Finn spent a year in Europe looking at ‘what’s next for the new and used car vehicle distribution’.

In a LinkedIn post published in June 2020 and titled ‘The Age of The SuperDealer’, Finn described his time in Europe, saying: ‘Without the encumbrance of being a CEO of a Public Company and having a corporate bias getting in the way, I have been able to have candid conversations with OEMs and dealer groups.

‘With investment funding almost dried up for many of the dealer groups, focusing their resources on more deep alliances with enlightened OEMs seems like a viable next stage with a short transition to the age of the “SuperDealer”.

‘It is clear that some big decisions need to be made in the near term.’

Founded in 1985, Hedin Group is one of Europe’s largest family-owned automotive groups.

Based in Molndal, Sweden, it has more than 125 locations and 3,600 employees in Sweden, Norway, Belgium, Switzerland and Germany.