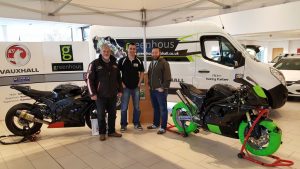 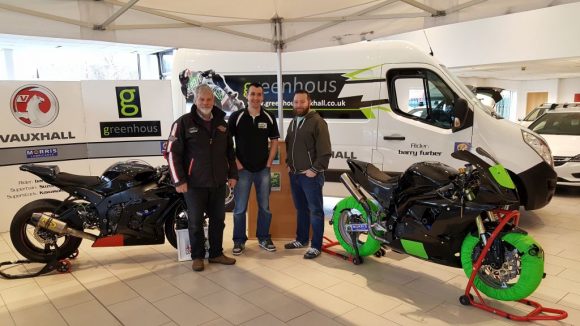 ON Saturday, February 10, Greenhous Vauxhall in Shrewsbury played host to a pair of racing motorcycles that competed at last year’s Isle of Man TT.

The motorcycles are owned and raced by Greenhous Vauxhall master technician Barry ‘Baz’ Furber, an avid motorcycle racer who has raced at the iconic event in 2016 and 2017.

Furber, who’s best result so far is an 11th place in the 2017 Lightweight TT race on his Suzuki SV650, is supported by his employers at Greenhous Vauxhall, who provide a Vauxhall Movano van for his racing endeavours, and are also prominent sponsors on his motorcycles when they are decked out in their full livery.

The public responded well to the event, which saw the Suzuki and a Kawasaki ZX10R superbike on display in the showroom. Furber was on hand to answer any and all questions they had, and his trophies from successes at various race meetings across the UK were on display, as well as photos and videos of him in action.

Furber is looking to return to the TT again in 2018, and will likely also return to circuits such as Oulton Park, and other road racing events such as the North West 200.

The technician’s racing efforts have been supported by Greenhous since 2016, and they will again provide backing in 2018, alongside other sponsors Barry is hoping to attain before the racing season begins.