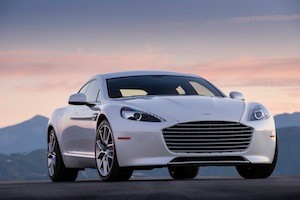 THE British sports car firm has given its four-door supercar a powerful makeover. But has it worked? James Baggott reports.

Meet Aston Martin’s slightly awkward-looking four-door saloon, but now with added adrenaline. As part of a mid-life refresh the S gets more power and even more refinement. The Rapide is the choice for the family gent, as it’s the only model in the maker’s range that comes with two rear seats.

An almighty lump, that’s what. The ageing 6.0-litre V12 is still in situ – a last hurrah before AMG work their black magic under the hoods of Britain’s finest – but for now it gets even more grunt. Power is up 80bhp to 550bhp and this helps the 60mph dash time tumble under that all-important five-second barrier, but only by a tenth of a second. Top speed is a heady 190mph and with those sorts of figures fuel economy and emissions suffer. The former is a rather woeful 19.9mpg and CO2 is puffed out at a rate of 332g/km.

In a word: Glorious. The leather is soft, the carpets thick and the wood burnished. Several cows were sacrificed to coat most surfaces inside and the instruments are as beautiful as one of the finest Swiss watches. Standard kit includes Bluetooth, sat nav, front and rear parking sensors, a tracking device and a stunning 1000W Bang & Olufsen stereo. Those rear seats have the option of TV screens (£2,495) and you can go pretty mad on the other options, too. Even the paint of our test car was an additional £3,495 – but it’s worth it for the name alone: Skyfall Silver. Cool.

Well, it’s not the most dynamic of Aston Martin’s range, that’s for sure, but then did you really expect it to be? No, this is a GT car to transport you and the family to the polo/Henley/ Alps with ease. It’s relaxed and sedate when you want it to be, but can still pick up its skirt and get going when you put your foot down. As the revs rise, the butterflies in the exhaust containing the cacophony of noise open, releasing a guttural V12 groan. The rear seats are comfy too, even for adults, but that said, headroom can be a little cramped.

Car Magazine said: ‘If you want a practical Aston Martin sports car, then the Rapide fits the bill. The new Rapide S only improves the Rapide experience.’

The Rapide S is a stunning way to travel. It’s luxurious, looks sharp and is caked in cool. The Rapide S is a big car – and it feels it on the road – and that engine really is starting to feel dated in terms of economy, but the power is impressive and if customers need those extra rear seats it’s worth considering… that is, of course, if they’ve got the cash in the first place!