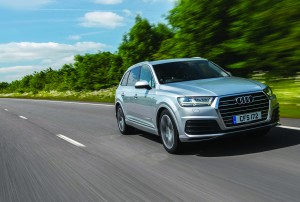 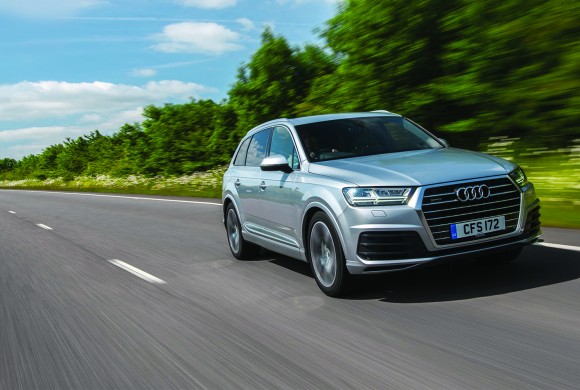 What is it?
This is the biggest member of the Audi family and the lightest in its class. The second-generation Q7 has been rebuilt from the ground up, creating a completely new car. It is slightly narrower and shorter than its predecessor, but is taller so it offers class-leading headroom.

What’s under the bonnet?
A new 3.0-litre six-cylinder engine debuts and offers strong performance. With 268bhp being distributed to all four wheels, the Q7 will get you from 0-62mph in just 6.5 seconds and on to a top speed of 145mph. To keep the weight of the car down, much of the engine is lighter, allowing the kerb weight of this Q7 to stand at just 2,060kg – not bad for a hefty seven-seater off-roader. The engine has also been tweaked for improved economy and offers impressive claimed economy for its size, at 47.9mpg.

What’s the spec like?
There is enough kit in the standard SE Q7 to keep finding something new every day for quite some time. Turn the car on and the sat-nav equipped media system will pop up from the dashboard, featuring a high-resolution 8.3-inch screen. There are seven seats, with the second row folding in three parts, and two seats in the third row that electrically emerge from the floor. We found the S line interior even more appealing, though, with leather and alcantara seats – chunky sports seats for those in the front – and the three-spoke leather-trimmed multi-function steering wheel feeling much more upmarket. The optional add-on of Audi’s digital virtual cockpit is quite striking too, with its street view-esque map even showing cars going by.

What’s it like to drive?
Exactly how a premium SUV should be, only faster. We knew the Q7 was going to be a quick, but going from a standstill to 62mph in 6.5 seconds really is quite something for a car of this size. The Q7 is a big SUV and comfort is superb. It glides over potholes and rough roads. On the motorway, refinement is flawless, although because of its height, there is a fair amount of roll when cornering at speed. One of the most impressive qualities of the Q7, however, is its impressively-small turning circle, thanks to the optional all-wheel steering that means it can turn round in less space than any of its rivals – even tighter than the much smaller Audi A4.

What do the press think?
Auto Express says: ‘The car is very pleasing and relaxing to drive either in town or on the motorway.’

What do we think?
We really like the Audi Q7. It looks a lot better than its predecessor and many of its older rivals. It also offers breathtaking performance stats, along with strong economy in 3.0-litre diesel form. Things only get better on the inside – and then better again when you press the start button and begin driving it. While the Range Rover Sport is still a tough rival, the Q7 is an appealing option and symbolises a huge step in the right direction for the German brand.