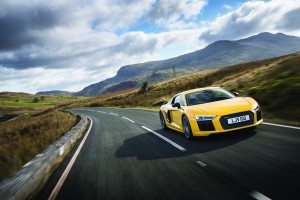 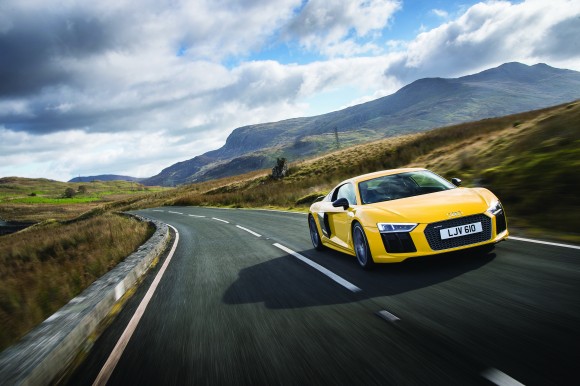 This is the long-awaited second generation of Audi’s R8 supercar. It was revealed to the world at the Geneva Motor Show earlier this year, but unusually the race car version was made immediately available while the road car has had to wait until now. The two share 50 per cent of components – including the engine and carbon fibre crash structure – and the GT3 racer won on its debut.

The tiny, tiny boot. The R8 is mid-engined, so the nose of the car is for your luggage – all 112 litres of it. Sitting behind the driver’s head is the 5.2 litre V10 engine, good for 532hp in the regular V10 or 601hp in this plus model. This isn’t assisted by any turbocharging, so the throttle response is immediate and the torque band is very broad indeed. It’s mated to a seven-speed auto quattro all-wheel drive system, so there’s plenty of grip whatever the weather. The 60mph figure comes up in 3.1 seconds, and it’ll keep going to 205mph. The price for that is 23mpg combined…

There are two specifications: V10 and V10 plus. Both are beautifully trimmed in Nappa leather and bear the new signature all-LED headlights. Also standard is Audi’s excellent Virtual Cockpit – a digital instrument cluster built around a 12.3-inch TFT display, with a number of display modes including a full-width satellite navigation display. The plus gains goodies such as controllable exhaust flaps, drive mode select and ceramic brakes, while both can be equipped with option laser high-beam assist that give a narrow-focus beam of light twice the distance of the LEDs.

Alarmingly fast, but also extremely surefooted and wholly docile around town. We were driving the more powerful V10 plus model in the kind of conditions UK owners are likely to experience for six months of the year and it never showed even the merest hint of misbehaving, even with provocation. When you’re done with the tomfoolery, the R8 quietens down to become a civilised cruiser. The ceramic brakes have an initial bite that is a little unsettling but otherwise it’s as easy as any regular Audi.

Autocar comments that ‘If you need everyday usability from your supercar, there are not many better options than this.’ The Telegraph adds: ‘This, in short, is a car which is equally at home pootling around town or tearing across a continent.’

If there’s a supercar better suited for Britain, we don’t know what it is. It’s quiet and restrained for much of the time, but savagely quick when you want it to be. Better yet, it deals with dismal weather as if it wasn’t there.