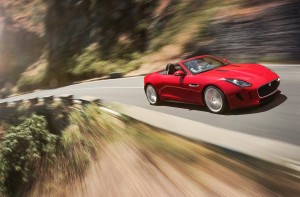 The E-Type replacement has only taken 50 years to arrive – but can it live up to the legend? James Baggott reports.

Quite simply, this is the most important Jaguar for more than 50 years. Not since the iconic E-Type has Jaguar launched a new model into this segment, and boy has the wait been worth it. The stunning F-Type is the British manufacturer’s new halo model – a high performance, two-seater convertible that’s charged with ‘changing the face of the brand’. Buyers are already queuing up for them, with a six-month wait already in place, and that’s before any of them have driven it. As soon as more potential punters get behind the wheel that wait is going to get longer. A lot longer.

Will buyers really care when the car looks as good as this? We doubt it. However the golf club set will want some toys and fortunately there are loads. Highlights include the eight-speed automatic gearbox (standard), the multi-adjustable sports seats, and Meridian sound system (not that you’d want to listen to it). There are some brilliant design touches too – like the central heater vents that rise out of the dash when you turn the air con on. And the deployable door handles that pop out of the bodywork. Ian Callum we salute you!

Incredible. Make no mistake, if you’re thinking this is simply an executive car park posing machine you couldn’t be more wrong. This is a drivers’ car through and through. We spent plenty of time in all derivatives and loved the crisp steering, the rapid eight-speed paddle shift box and the sound – oh my god the sound. Under acceleration all versions sound brilliant, and fizzle, crack and pop on the overrun. It feels a lot lighter than it looks – with extensive use of aluminium in the construction helping here. On the track it’s nimble and involving and huge fun while on the road it’s nothing short of intoxicating. We’d go as far as saying this is the best driver’s Jaguar ever.

Well, we wrote this review and sent the magazine to the printers before the embargo lifted on reviews, so it was impossible to tell. However, several publications had passenger rides in the car earlier this year. Back then Autocar said: ‘The F-Type has the soul of a responsive, agile sports car.’ Pistonheads added: ‘Apparent is the Jaguar-like ability of breathing across road surfaces, keeping harshness at bay’. We’d be surprised if most magazines gave the F-Type anything less than five stars.

It’s the car of the year, without a shadow of a doubt. We knew the F-Type was going to be good, but just how good is shocking. Our pick of the range would be the V6S – it’s just as much fun to drive as the V8, sounds just as brilliant, and the peaky power delivery is stunning. But the real coup is the pricing – every model is 25 per cent less than the equivalent 911, its bitter rival. On a track, we’d hazard a guess at the 911 being quicker, but the German’s abilities aren’t worth the extra money. Jaguar is going to have it away with this car – it’s a game changer for the manufacturer – and we feel honoured to have been there at the start of it.