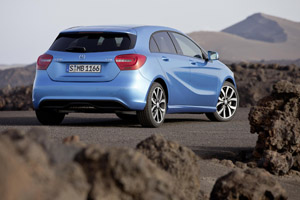 THE new A-Class has ditched its old mini-MPV packaging and is now a sporty hatchback. James Batchelor has driven it.

Mercedes-Benz calls this the most important car they’ve offered for a generation – and that’s quite some statement. But it’s easy to understand their enthusiasm. The new A is longer, lower and wider than its predecessor. Gone is the old A-Class’s mini-MPV styling and safety-first packaging, and in comes a more conventional premium hatchback look. It’s only available as a five-door version but there’s a coupe and mini-SUV on the cards.

There’s a vast range of models. The line-up starts with the A 180 for £18,945, which comes with air conditioning, a multifunction steering wheel and stop/start. For now, the range peaks with the Engineered by AMG at £28,775. The pick of the line-up is the mid-spec Sport – which ranges from £21,240 to £24,720, and has niceties such as 17-inch bi-colour alloys, cruise control, carbon-fibre-like interior trim and twin exhausts.

It may share the same name with the old A-Class, but there’s no wobbly body control with this new one; this is a very competent machine. Mercedes has worked hard to give the A-Class a neutral driving experience – no understeer or oversteer – and it has worked. Cornering is flat, the steering weighty, the driving position is close to spot-on and the new seven-speed dual clutch gearbox is a peach. The ride, however, seems unnecessarily hard for UK roads, spoiling the driving experience a little.

Autocar said: ‘The new A-Class is a divisive car. It appeals with its new looks and sporty demeanour, but its hard ride may limit its chances of success in the UK.’ Meanwhile, the Daily Telegraph said: ‘With the right suspension, the new A-class has a fine ride combined with some of the best engines in the game.’ Auto Express liked the car but felt the ‘ride is just too firm’. Honest John concluded: ‘The A-Class struggles to compete with the BMW 1 Series for handling. Will have to shake off dull image of previous Mercedes A-Class.’

Mercedes has built a class act here. The firm has sold 2.1 million units of the A-Class since its introduction in 1997 – but, interesting looks aside, both the Mk1 and Mk2 never got your pulse racing. This new one does; it’s not as fun to drive as a BMW 1 Series, but it’s far more stimulating than the new Audi A3. It’s one of the best Mercedes in recent years. 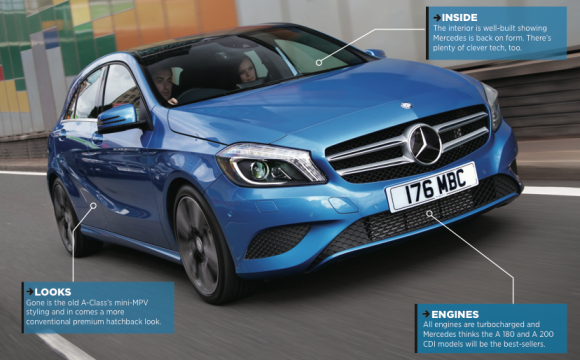