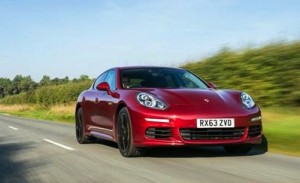 Porsche’s Panamera has been refreshed, with new styling, tech and a hybrid option. Daljinder Nagra has driven it

Conspicuous consumption with a conscience. For those less interested in the ballistic pace of its V8 engine Turbo offerings, Porsche is serving up its four-seat Panamera with a hybrid system that is able to propel the car up to 22 miles (and at speeds of up to 84mph) on battery power alone. It returns an incredible 91mpg on the combined cycle and thanks to CO2 emissions of just 71g/km, the E-Hybrid is even exempt from the London Congestion Charge, something – due to the new, more stringent rules – not even a Toyota Prius can boast.

Don’t think all this eco-worthiness makes the Panamera S E-Hybrid slow – this is a Porsche after all. The 410bhp shove from the 3.0-litre supercharged V6 and 70kW electric motor means this will sprint from 0-62mph in 5.5 seconds and on to a top speed of 167mph.

No trim levels as such, just increasing levels of standard equipment the higher you venture up the model hierarchy, and an extensive options list which can see you easily add £20,000 to the car’s list price should you get too happy ticking boxes. With the refreshed model a manual gearbox is no longer offered, with all cars bar the diesel and hybrid coming with Porsche’s excellent PDK twin-clutch automatic instead. Also available are a plethora of electronic safety aids, such as lane change assist and adaptive cruise control with Porsche Active Safe, which alerts the driver to potential obstacles.

Thanks to its battery pack and electric motor gubbins, the Panamera hybrid weighs in a whopping 325kg more than the normal entry-level model, and unfortunately this extra bulk does blunt the driving experience somewhat. Jump out of an S or Turbo model and the E-Hybrid feels a tad lethargic, less eager to change direction and with acceleration at odds with its 410bhp headline power output.

Car Magazine said: ‘It costs a chunky £88,000, but promises to offer the economy of a city car and the performance of a super-saloon, depending on your mood and the selected on-board modes.’

The Panamera remains a highly accomplished, involving and desirable GT car. Its new plug-in hybrid system certainly makes it the eco-darling amongst its peers, but you’ll really have to want a part EV vehicle to shell out the weighty premium over the impressive and frugal diesel model which, in our opinion, performs even better.