Home > News > The heat is on: Lawgistics’ Bangers4BEN hopes go up in flames… 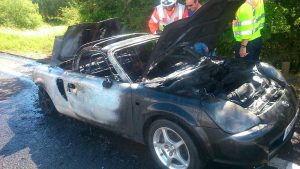 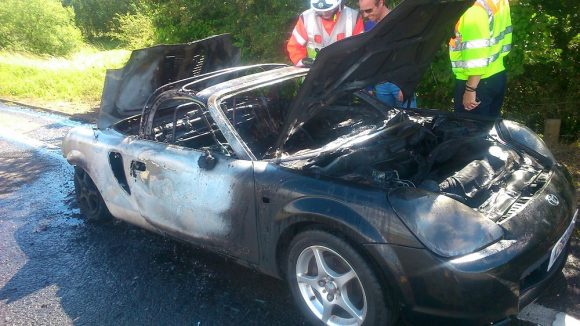 The heat is on: Lawgistics’ Bangers4BEN hopes go up in flames…

WITH three months to go to Bangers4BEN 2016, those planning to take part are already buying cars and making preparations for the trip.

A couple of days ago, the Lawgistics team went to pick up the chariot that they hoped would take them to Italy in October – but things didn’t quite go according to plan.

@PrestigeDiesels @believebecca #ouch …a Judge and Lawyer walk into a used car site and buy the cheapest car …what can go wrong? #b4b16

What could possibly go wrong?

The pair, sales manager Ian Gardner and sales and marketing director Joel Combes, were delighted with their choice. The car was a 15-year old Toyota MR2.

Gardner explained: ‘The Toyota MR2 has always been a firm favourite of mine so I couldn’t believe we were going to do Bangers in one. The bodywork was in great condition, the interior tidy and the engine clean. It started first time, albeit in a cloud of smoke. But even while choking on the smoke, our grins were still evident.’

It was on the drive home that things took a dramatic turn. Gardner found himself face-to-face with some parts from their new car as followed Combes.

Gardner said: ‘On the home stretch, with the MR2 seemingly driving better than at the start of the journey, and while overtaking, there was a bang, a big puff of smoke and I found myself swerving to avoid chunks of metal that had broken off from the engine.

‘My position allowed me to see flames in and around the engine of which Joel was oblivious. He managed to get the car onto the slip road and pulled over.

‘I stopped about 30 feet behind him and put my hazard lights on.

I guess our baby's not gonna make #b4b16 #catastrophicfail but both the judge and @LawgisticsLegal are safe pic.twitter.com/uUzOWEIouL

‘I waited for Joel to exit the vehicle with some urgency. I waited….and waited as the flames took hold. Seemingly unaware of the danger he was in, I moved my car alongside the MR2 screaming… “the car’s on fire!”.’

A carriageway had to be closed and Cambridgeshire Fire and Rescue dealt with the flames, which by now were engulfing the entire vehicle.

Combes said: ‘I could feel the clutch slipping and it was that which broke off down the road. We suspect this broke the fuel lines and caused the fire.’

Fortunately, the Lawgistics team escaped unscathed but the car is looking very much the worse for wear. It’s fair to say both team and car are well and truly gutted.

‘It felt like we had got the best Christmas present ever and broke it five minutes after unwrapping it,’ Gardner added.

To find out more about this year’s Bangers4BEN event, and to secure your place, contact Kelly Neal at BEN.

MORE: Motorpoint opens the doors to its latest branch