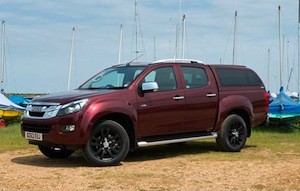 This not only represents a 50 per cent increase versus the same period last year but also surpasses the company’s initial target of 3,500.

The brand has recorded growth of 272 per cent over the past four years and its sales performance in the UK will ensure it remains the number one market in Europe ahead of Turkey and France.

In the new year, Isuzu has also announced that it will reveal a number of new D-Max projects.

‘Next year is going to be another exciting period of growth for Isuzu as we look to maximise new opportunities, continue developments to make the road-going pick-up even more desirable, and engage in new off-road performance activities that will test the ruggedness of an Isuzu D-Max to the maximum.’