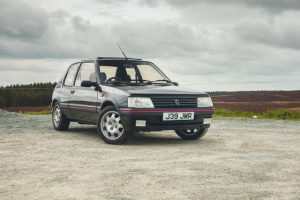 James Baggott: Hoarding causes me a world of pain, but it’s a habit I just can’t break

THOSE who’ve read my rants before will know I have a habit of buying old cars, bikes and other machines and then putting them in storage and not using them.

It’s a sort of hoarding affliction. Magpie-like, I spot some tatty old hot hatch, or similar, buy it on a whim and then stash it under an old bed sheet never to see the light of day.

The problem with this hoarding is that it attracts other hoarders. I spent two full days before Christmas sorting out our work storage unit which, like a street corner in London, had attracted piles and piles of what can only be politely described as crap from what I assume is half of Gosport.

Among the piles of old magazines, used coffee cups and empty Mac boxes, I found my Ford Fiesta XR2 hidden under two car covers. It seemed to be now doubling as a lean-to for a selection of CDX pop-ups, easels (of which I apparently own 14) and some Car Dealer Suppliers Guides from 2016.

Once I’d excavated the Ford, I pulled the cover back and had the bright idea of trying to start it.

Why I did this when my main task was cataloguing the entire contents of the storage unit and making copious tip trips is beyond me, but I have the attention span of a toddler and the Fiesta was VERY shiny.

The door opened – a bonus – the window didn’t (nothing new there then) and after I connected the battery it turned over. Of sorts.

By turn over, I mean it coughed and wheezed in a 40-a-day smoker’s morning routine kind of way, and failed to combust any fuel. I emptied the contents of a can of Easy Start into an opening in the engine, which I assumed was the airbox, but this made little difference. Then the battery died.

My colleague, whom I’d enlisted to help me compile an inventory of the lock-up, asked why I’d ditched counting plates and feather flags and was instead swearing at a 33-year-old car. I really didn’t have an answer so instead uncovered my Peugeot 205 GTI and moved on.

The Peugeot was easier to extract from the rubbish. Regular readers will remember the unsuccessful sale attempt I’d made of my 1990s classic back in the summer. The one where I put it in an auction and then bought it back myself – a little outing that cost me close on £1,000 for the privilege of driving it to Warwickshire and back. The months haven’t eased the sting of that one, let me tell you.

Anyway, this was in a slightly better mood and agreed to start. Granted, there was a bit more carbon dioxide coming out of the back of it than the government/Greta/Sharon would probably like, but then I live next to Portsmouth and compared to the ferries it’s a small drop in the ocean. I reversed it out of the way and – huge  success – the gearbox worked.

OK, the gear knob might have disintegrated a little bit more in my hand, but I’m starting to think that’s part of the charm. I’m going to make a new one out of some sugar cubes, as it’ll be at least 73 per cent more structurally sound than the current one.

I drove it around the car park a bit, let it overheat and then reversed it back into place while my colleague coughed a lot and his eyes watered at the fumes. After a bit more pallet-moving and throwing away more empty boxes we’d decided we needed to keep for reasons only an insane person could understand, I looked at my bikes. Under two more blankets in the corner of the garage (it’s a big unit, which is half my downfall) were my Ducati 998 and BMW R1150 GS Adventure.

Neither of them had moved in six months. In fact, the Ducati had clocked up the impressive total of 157 miles in 18 months, so of course I decided to attempt to start them both.

By this point, my colleague had given up any hope of sorting the other piles of useless goods and was having far more fun laughing at my inability to keep anything that digested fuel in any working state.

So, when I attempted to start my BMW and the battery made the feeblest attempts to turn over before promptly dying, the chuckles turned into full-on belly laughs.

I ordered a new battery for the Fiesta and the BMW and then looked longingly at the Ducati. Plugged into a trickle charger, the battery looked fine, so I jumped on and thumbed the starter. The Italian spluttered and chugged away as it attempted to explode some unleaded in its cylinders, but – you guessed it – nothing.

By this point, I was ready to hire a transporter for a trip to the beach, where I planned to push them into the sea, but instead I stormed out of the lock-up for an angry cup of coffee. I was gone five minutes and returned with a smile on my face, to a look of bemusement on my colleague’s face. ‘Why are you smiling?’ he asked. ‘Good news!’ I reported. ‘I’ve bought another car!’

During my short walk back to the office, my seven-year eBay search for a Citroen Saxo VTS had finally borne fruit. One had popped up for a staggering £1,750 so I bought it there and then sight unseen. Don’t ask me why. A bit like childbirth (I imagine), as soon as I’d left the lock-up I’d forgotten about the pain of the previous few hours and decided that what I really needed was more of the same. Will I ever learn?

MORE: The Car Dealer Ewards are back! Here’s how you can get involved

MORE: Revealed: Our line-up of workshops for CDX at Farnborough on April 28