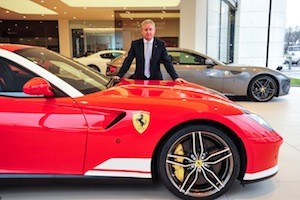 JCT600 has reported record figures for new car sales in September, showing an increase of 66 per cent on last year.

September is traditionally one of the busiest months for new car registrations with the introduction of the registration plate, and the Yorkshire based car retailer managed to sell 2,500 cars.

The family-run business operates 47 dealerships throughout Yorkshire, Derbyshire, Lincolnshire and the North East.

JCT600 says this boost in sales is also down to a steady increase in demand and sales throughout recent months and the recent expansion of the group.

Chief executive of JCT600, John Tordoff (pictured right), said: ‘After a tough few years in the car industry, it’s great to see the market improving in the UK although it remains weak across most of Europe.

‘While our record month is partly due to the recent expansion of the group with the addition of some Gilder Group dealerships earlier in the year, it also results from a 24 per cent rise in new car sales across our existing dealerships.’

He added: ‘According to recent figures from the Society of Motor Manufacturers and Traders, new car sales across the UK rose in August for the eighteenth month in a row, up 10.9 per cent on the same month last year. We have seen this upturn in consumer confidence reflected in our dealerships over the last three months with increased footfall and a marked rise in new car sales.’