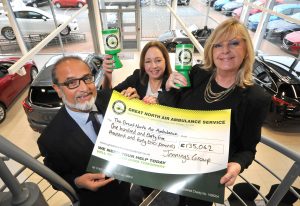 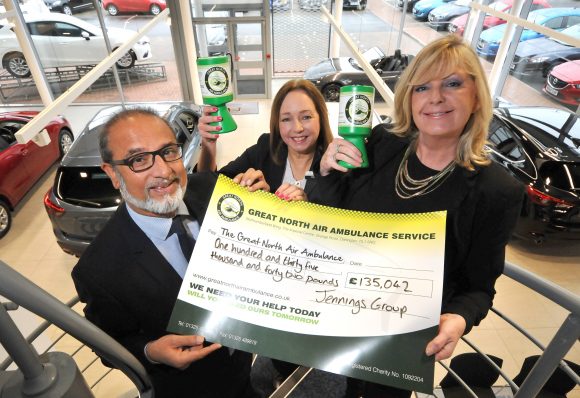 MOTOR dealer group Jennings has raised more than £135,000 for its chosen charity for 2016 – the Great North Air Ambulance Service.

A cheque presentation took place at the group’s ‘supersite’ in Cargo Fleet Lane, Middlesbrough, where it was also announced that it would be committing to the charity for a second consecutive year.

Nas Khan, managing director of Jennings Motor Group, who was awarded an OBE in the Queen’s New Year Honours List for his service to charity and the economy, said: ‘We are absolutely delighted with the amount raised from last year’s fundraising efforts and we’re looking forward to working with the dedicated team at the Great North Air Ambulance for a second consecutive year.

‘We are inundated with a high volume of charity requests on a daily basis, but unfortunately it is impossible to help everyone, which is why we decided to nominate a specific charity on an annual basis.’

When the time came to review which charity to support throughout 2017, it was down to staff who were asked to take part in an online vote – with the overall majority wanting to support the service for another year.

Grahame Pickering, the chief executive of GNAAS, said: ‘We are overwhelmed that the staff at Jennings have chosen to take us on for the second year. The firm is already one of our biggest ever corporate supporters, so having them behind us for another 12 months is a tremendous boost.’

Fundraising throughout 2016 was given an extra boost as a result of the motor dealer group donating a new Kia Rio for the charity’s sixth consecutive raffle – which raised £120,000.

Other fundraising throughout the year involved staff taking part in various physical outdoor activities, as well as a variety of fundraising events, such as bake-offs, raffles and coffee mornings.

On SuperUnleaded.com: Lack Of Phone Signal Locks Tesla Owner Out Of His EV