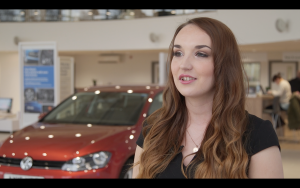 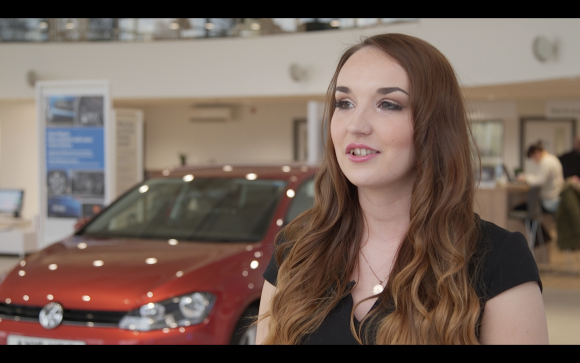 A KING’S Lynn sales executive has been named a rising star after achieving record sales in just six months.

Casey Mackenzie from King’s Lynn Volkswagen changed her career in September 2015 and has exceeded expectations by claiming the top salesperson title.

Previously the 22-year-old had been the Volkswagen retailer’s receptionist and service advisor before turning her skills to sales.

Having sold 61 vehicles in three months Casey believes her success lies in her training.

She said: ‘I always had a passion for cars so when a friend told me about the position at King’s Lynn Volkswagen, five years ago, I jumped at the opportunity.

‘My training has been second to none, both from the brand and my colleagues Paul and Aaron. Stepping into sales was a little daunting but it’s a challenge I love. My colleagues call me a sponge as I soak up everything they say to me.

Paul Underhill, general sales manager at King’s Lynn Volkswagen, added: ‘Casey has hit the ground running since starting her position and has a fantastic ability to understand what our customers are looking for.

‘It’s clear to see her passion and drive in wanting to help customers make the right decision. She is a great asset to the team.’

MORE: Win a fantastic Easter prize if you’re the 1,000th person to sign up for ‘CD-Eggs’!

MORE: Best car on sale to be named at Autocar Awards – right after CDX on May 24