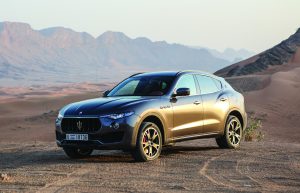 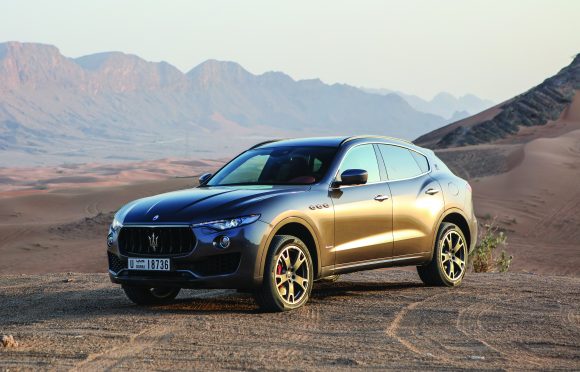 Some might say the Levante has been the saviour of Maserati – and they’d be right. In a market that’s moving swiftly away from saloons in favour of high-riding off-roaders, even Italian sports car manufacturers need a 4×4 in their line-up if they’re to balance the books.

That’s why Lamborghini is putting the finishing touches to its soon-to-arrive Urus,  Ferrari is secretly beavering away on a rumoured 4×4, and why Maserati launched the Levante a year or so ago.

Sadly, Maserati went off half-cock – launching its SUV in the UK with only a diesel. Now, the car that accounts for more than half of the Italian firm’s sales worldwide has been given the powerful petrol unit buyers wanted from the start, plus some tech tweaks to keep it fresh.

Don’t expect any radical styling changes from the 2018 model year Levante – they’re as hard to spot as an SUV mule from sister firm Ferrari. Squint and you might just see the new badging on the doors, but we’d forgive you if you missed them.
Aside from the petrol powerplant, which we’ll get to in a minute, Maserati has added a few new safety features to the Levante.

There’s electric steering, which means active lane assist is now a possibility, as well as blind spot detection with ‘haptic’ feedback via the steering wheel.

There are revised trim options to choose from, too – a base model, a GranSport and GranLusso. The differences are minimal between the top two and centre mostly around the colour of the grille and interior trim. As such, they cost exactly the same amount of money.

The biggest change is nestled up front. The petrol unit is the one the Levante should have been launched with and brings the SUV alive.

It’s been available on the continent for a while, but is now coming to the UK in right-hand- drive guise and serves up 424bhp and 580Nm of torque from a Ferrari-developed 3.0-litre V6 twin-turbo. While the engine might not appear in any Ferraris, it does sound typically Italian  on start-up – throaty and over the top – and  is good for 60mph in five seconds and a top speed of 164mph.
It emits 253g/km and returns 25.9mpg on the combined cycle, too.

While an SUV is never going to be as dynamic as its low-riding saloon rivals, the Levante does a good job of pretending to be sporty. It’s certainly got an impressive turn of speed, and in the bends (of which our test course had very few) it felt taut and dynamic compared with some rivals.

It’s helped by a number of driver assistance modes, which lower the adaptive air suspension in sport and increase it when off road.

Maserati subjected our test cars to some soft, sandy dunes, but was forced to lower the tyre pressures before we were allowed to tackle them. The clever electronically controlled differential certainly coped admirably with the conditions, though, and in the hands of a professional driver (we weren’t deemed capable), it managed to scale Dubai’s Fossil Rock at an impressive pace. That said, one did get stuck in the deeper dunes and a Toyota was forced to rescue it…

We didn’t get on particularly well with the new steering. Although light at parking speeds and now able to offer lane-keeping assistance, it’s lost some of the feel the hydraulic system that went before it had.

Maserati hopes the unique looks of the Levante will win it buyers. It won’t be to everyone’s tastes, though, with a huge gulping grille and shark-like proportions to its body. It’s been described as having an air of an Infiniti QX about it, and side by side you can certainly see a resemblance, but just don’t let the Italians hear you say it. It’s got a unique look on the road, with the eyebrow-like daytime running lights and quad tailpipes making a bold statement.

Inside, the Maserati has some luxurious touches and the materials feel premium. Sadly, we found the leather seats incredibly uncomfortable, with the back rest particularly pew-like. The steering wheel is too chunky and has too many pointless buttons and the infotainment system is hard to fathom. Compared with intuitive units, such as the one found in Volvo’s XC90, the Maserati system looks outdated. There’s plenty of room in the back, though, a decent-sized boot, and new soft-close doors add an extra luxurious touch.

Auto Express wasn’t particularly taken with the new Levante, awarding it just three stars. Autocar was kinder, handing out four and adding: ‘Praise be, what’s shaping up to be the most important Maserati in decades seems to have negotiated its awkward early years and blossomed into the car many probably hoped it might be from the off.’

Maserati is probably kicking itself that it didn’t introduce the Levante with this petrol powerplant from the off. Buyers really couldn’t have cared less about the added expense a petrol unit carried over a diesel – they simply wanted the fastest, most expensive model there is. Those buyers will be satisfied with these results then, as the Levante now comes with the characterful engine it always deserved. It’s a shame the steering doesn’t live up to the hype, but most owners will soon see past that and instead enjoy all the benefits of an Italian sports car in SUV clothing.