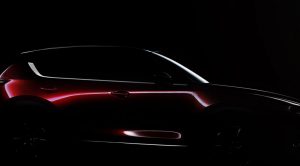 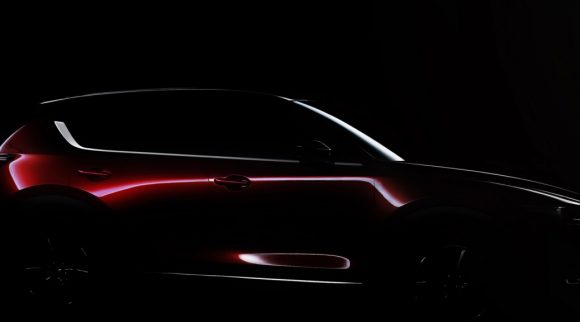 MAZDA will unveil the updated version of its popular CX-5 crossover at the Los Angeles motor show this month.

The Japanese company says the new CX-5 will be refined in ‘all aspects of design and technology’, with the existing car’s Kodo design language ‘taken to the next level’.

A teaser image from Mazda seems to show a slightly sportier stance for the new SUV, with a swooping roofline and a rear door that seems to have been stretched further along the car’s flank.

The grille appears to have been lowered, too, leaving a sharper angle at the end of the bonnet and a more vertical front end.

The plastic body cladding around the wheel arches, however, has remained in place, as have the sculpted lower doors.

Inside, the car is expected to take a similar interior to the latest versions of the Mazda3 and Mazda6, with the high infotainment screen and updated steering wheel.

The CX-5 may also share those cars’ G-Vectoring Control torque-vectoring system in a bid to further improve the model’s much-lauded driving dynamics.

It also seems likely that the other models’ Natural Sound Smoother – a damper fitted inside the piston pin to reduce noise and improve refinement – will feature in the CX-5’s 2.2-litre diesel engine.