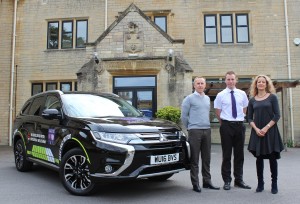 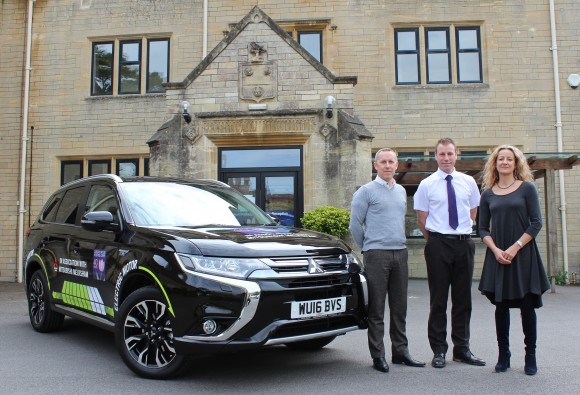 A HOSPICE that cares for people in Wiltshire and Somerset has saved thousands of pounds thanks to a Mitsubishi dealership in Melksham.

Dorothy House Hospice Care was given a Mitsubishi Outlander PHEV for a year by Melksham Mitsubishi on Western Way in 2015.

The partnership proved to be such a success that the dealership has handed the hospice the keys to a new Outlander PHEV, which they will keep for a further six months.

Henrietta Beard, corporate and major donor fundraiser, said: ‘We are delighted with the generosity of Melksham Mitsubishi and the loan of the Outlander PHEV over the past year.

‘The vehicle has been used by all areas of the hospice, from the nurses accompanying patients on an excursion to the chief executive driving some colleagues to a conference. This has made a real difference and we are very grateful to receive another Mitsubishi for the coming six months, which coincides perfectly with our 40th birthday celebrations.’

Barry Newley, estates manager at Dorothy House Hospice Care, added: ‘Having the Outlander PHEV for the past year has equated to £4,400 of savings for Dorothy House, which is a fantastic amount of money and so very much appreciated.’

The Outlander PHEV has become the UK’s number-one plug-in vehicle, according to the SMMT. Combining electric and petrol power it has a range of 541 miles, eliminating range anxiety and making it the ideal car for the staff at Dorothy House.

James Ryan, sales manager at Melksham Mitsubishi, concluded: ‘Dorothy House do amazing work for people in Wiltshire and Somerset so we are delighted to be able to support them for the next year. The Outlander PHEV boasts impressive fuel economy and ultra-low emissions – all in a spacious four-wheel-drive vehicle, which will be perfect for the team at Dorothy House.’

On SuperUnleaded.com: This Lamborghini Is The Taxi You’ll Never Be Able To Afford