Home > Interviews > Mercedes boss: ‘I don’t want to be a pre-registration denier’ 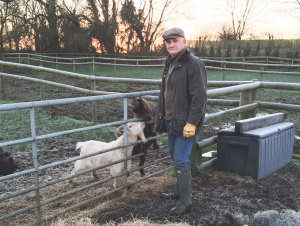 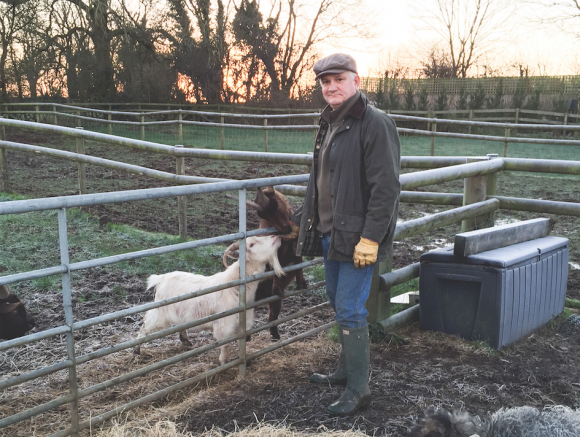 Mercedes boss: ‘I don’t want to be a pre-registration denier’

JAMES BAGGOTT finds the MD of the premium German manufacturer’s UK arm in a no-holds-barred mood as he discusses the past, present and future.

When you’re at the head of a premium car company, one would imagine the stress and strain could sometimes get pretty intense. However, Gary Savage, managing director of Mercedes-Benz UK, has a rather unique way of winding down after a day crunching numbers – mucking out his chickens.

‘I don’t think I ever really switch off, but I do have an incredible distraction,’ Savage revealed. ‘I have a smallholding on which I keep pigs, goats, sheep and donkeys – it’s just north of Towcester. I was cleaning the chickens out yesterday and thought to myself, “I wonder how many people at work would ever think that I would be there with my head in a chicken coop scooping this out.”’

Not many, we’d guess. It’s certainly a unique way for a car manufacturer MD to wind down and appears to be working.

Sitting round a coffee table made from two alloy wheels signed by the firm’s best-paid company car drivers (Lewis and Nico, if you’re wondering), Savage seems comfortable and relaxed and seemingly willing to talk openly about any subject. 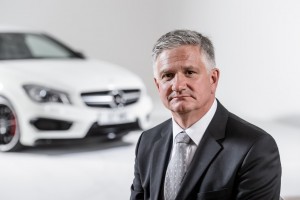 His office is on the top floor of the company’s impressive head office in Milton Keynes and overlooks the reception area and car park. ‘I’m a glorified car park monitor, really,’ he jokes, when I mention his ‘impressive’ view. Flanked by his PR man – who takes as many notes as I do – Savage settles into our chat quickly. Riding high on securing first place in the recent NFDA Dealer Attitude Survey and buoyant sales figures for 2015, he is keen to talk about how happy his network is with representing the premium manufacturer.

‘One of our real strengths is the fact we have 20 dealer partners across 32 market areas and that means we are able, as opposed to getting 200 dealers in a room like other manufacturers have to, to get 20 partners in a room and have a genuinely meaningful discussion,’ he said.

‘A few weeks ago I was able to make a very informal, almost one-on-one presentation to our investors on what our growth has been and what our future aspirations are, and I could do that in a very intimate environment. We were in a lounge, not a national conference centre – and I think that’s the real difference.

‘Back in 2010 we were 16th in the NFDA survey – now we’re number one. Without the strength of our partners that we have, without their ability to invest, without their alignment, we simply wouldn’t be able to achieve what we achieve today.’ Savage points out that Mercedes-Benz has been growing rapidly too. By the end of 2015 the firm had sold around 22,000 more cars than it had in 2014. ‘There’s isn’t a single other manufacturer in the UK that grew by that number of vehicles,’ said Savage.

The maker is still trailing its rivals in total sales volume figures, though. Despite growing by 16 per cent compared with 2014, Mercedes finished in bronze place with 145,254 registrations in 2015. BMW was first with 167,391 sales and Audi a very close second, notching up 166,709 – just 682 cars off the top spot. That 16 per cent leap for Mercedes isn’t to be sniffed at. BMW managed 12 per cent while Audi grew just four per cent when compared with 2014. But with this rapid growth comes the need for balance. 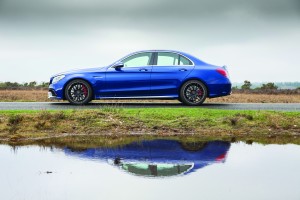 Just how does Mercedes – and the other makers in the top three – manage to keep a premium feel for customers when it is potentially moving into volume segments? For the record, all three outsold former ‘volume’ players Peugeot and Citroen by 60,000 cars…

‘We’ve seen no deterioration in how our customers rank the brand in terms of premium and prestige,’ says Savage. ‘It’s still a brand that people aspire to, even though it’s more accessible these days.

‘We’re able to make Mercedes more accessible through monthly payments. But this is a brand that’s 130 years old – we invented the car, so we invented the industry in many respects.’

Savage likens the experience of buying a Mercedes to buying groceries at Waitrose – some customers who buy an A Class in the volume segment expect a premium experience, like buying their shopping from the premium supermarket as compared to Lidl. But at the same time Savage says the brand needs to still offer ‘boutique’-style experiences for those customers shelling out for its higher-end cars, such as AMG models.

‘Being a premium brand is as much about delivering a premium service as it is about premium cars – and our retailers are doing just that,’ explains the MD, expressing the point with solid hand gestures. Savage certainly seems fired up as he speaks about his dealers and the brand’s success and his answers are long and detailed. As he’s in the mood for talking, I quickly move on to ask his thoughts on pre-registrations.

‘Part of what we have to deliver is hitting the sales targets that we are set and the aspirations of the business globally for this country.

‘The monthly target for me is the most important we have and it’s a priority that we hit it and we put everything in place to ensure that the network can do that.’

Savage explained that when he arrived at Mercedes, he changed things from quarterly targets to monthly to help ease the pressure that dealers felt at the end of a quarter.

‘The level of pre-registration that our network is having to undertake to hit its targets has diminished considerably,’ revealed Savage.

So is this a first? A manufacturer boss openly admitting that they’re pre-registering cars is certainly something I thought I’d never hear. What’s more, now it’s written down it feels even more shocking. However, Savage stresses he doesn’t think pre-registrations are a problem – or certainly anything new.

He likened it to technology customers – some want box-fresh, some are happy to buy refurbished from a manufacturer, others are comfortable with buying used from eBay. His point being that customers are happy to buy nearly-new products such as pre-registered cars if they know they’re getting a discount to do it and are still buying from a reputable dealer.

Savage explained: ‘There are many categories of customer now and the customer knows what type he is. There are those who buy new and there are customers who will buy delivery-mileage cars, while there are customers buying three, five and 10-year-old cars. The market is in good health because in the end these cars are all being sold.’

The Mercedes boss also pointed out that despite this, his network has improved its return on sales from 1.7 per cent to 2.2 per cent – which is undoubtedly an impressive figure.

Changing topics, I wonder what Savage made of the VW emissions scandal. As a contemporary German manufacturer boss, did he think that his neighbours just down the road in Milton Keynes handled the crisis well? Despite being warned off answering by his PR chief, Savage still does. ‘I have great admiration for Paul Willis [VW Group MD], from a peer-to-peer perspective, for the way he handled the parliamentary select committee. I thought he did that incredibly well and incredibly professionally. He was clearly very well prepared.’

The Mercedes boss doesn’t think the crisis is over yet, though, and says there is still a danger of it rubbing off on other brands.

‘We’re not through this yet – we’re in the middle of it,’ he said. ‘It rubbed off on the industry as a whole – not just the German brands.

‘It was contagious and moved very quickly from emissions to miles per gallon. It’s not been good for the industry and our colleagues over the road have had to cope with quite considerable disruption, particularly their network.’

So he must have been very happy Mercedes came out early and stated that its cars weren’t affected. ‘I’m delighted our business has been so utterly unequivocal in categorically saying that it’s something that we’ve not been involved with or undertaken,’ he said.

‘I was delighted the board was able to say that and it was a good thing to tell customers.’

So what’s next for the brand? Is there anything that keeps Savage up at night, other than his chickens? ‘Actually, I’m in a blessed position. I don’t have a lot that worries me,’ he says. ‘We have a lot of opportunity and real momentum, so what I’m completely consumed with is ensuring that we keep that going.

‘When I look back to 2010, we had a real parent/child relationship with our dealers and I said they will judge me on whether that changes. I have never enjoyed that type of relationship. I think that has changed.

‘I think that pays off and means we continue to have the opportunity that we currently enjoy.’
It’s clear Savage has a strong team around him and he’s quick to point out the hard work his dealers do makes his life a hell of a lot easier.

‘I think everyone works very hard and everyone puts in a lot of hours,’ he says. ‘I’ve got a very committed and dedicated team.

‘I know everyone will tell you their teams are great, but sometimes you are just fortunate to be somewhere – and I’ve only been there twice in my career – where the planets align, where it all just clicks, and that moment is at Mercedes-Benz right now. It’s quite remarkable.’