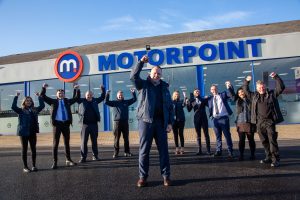 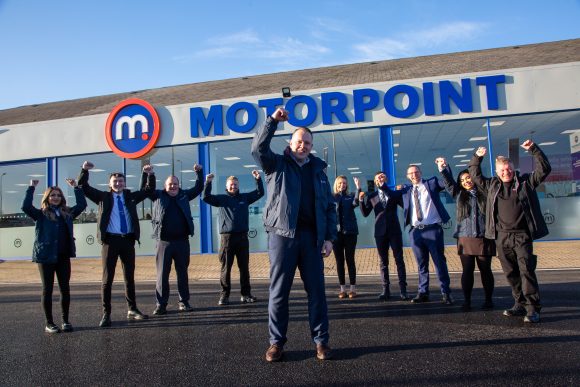 Listed car supermarket group Motorpoint has laid out an ambitious new plan to rapidly drive growth and double its revenue.

Announcing its full year results to the Stock Market this morning, Motorpoint said it aims to double annual revenue to £2bn, open 12 new dealerships and disrupt the trade auction players.

In a direct response to the launch of online only car dealers like Cazoo, Motorpoint said it aims to increase its digital revenue to more than £1bn.

In its latest annual numbers, Motorpoint said that 69 per cent of its cars were sold online – 47,000 in total.

In total it sold 68,000 cars during the year including 25,000 which were sold to the trade on its Auction4Cars.com website.

Stock brokers were impressed with the plans.

Shore Capital said Motorpoint is a ‘potent mix’ that represents the ‘future of the nearly new market’.

It said it sees a ‘disconnect’ between the ‘lofty’ valuations of the likes of Cazoo and other online-only used car dealers labelling them ‘inferior’ models.

In a briefing to investors it said Motorpoint is ‘ready to accelerate’ and should make for ‘an exciting ride’, adding ‘the current starting grid is a good place to get on board’.

Liberum said the update was a ‘bold statement of intent’ and increased its target price for Motorpoint to 435p from 290p. It said profit could increase 70 per cent by the 2023.

Mark Carpenter, Motorpoint CEO, said: ‘I am delighted with our performance in the year given the external challenges faced as we have transformed our capability by continuing to invest in our e-commerce execution.

‘We now have a fully scaled home delivery service, an integrated, end-to-end digital customer journey, additional capacity to grow through our increased preparation and branch presence, and an ambitious growth strategy to more than double revenue and profit in the medium term through increased investment in technology, marketing, data and talent.’

Despite the fall in revenue, margins were improved with 8.7 per cent made on each unit.

Motorpoint said it has delivered 9,300 cars to customers’ homes since launching the service last May.

It opened a new showroom in Stockton on Tees during the year and a preparation centre in Scotland that will give it capacity to process more than 20,000 extra cars a year.

In its plans for the medium term, Motorpoint said it will be opening 12 new showrooms as it looks to ‘increase investment in the customer proposition’.

It will also focus more heavily on its digital sales with further investment in ‘automation’.

On the trade sales front, Motorpoint says its auction platform will play a core part of its plans for growth.

The update said: ‘Our Auction4Cars.com business has a huge opportunity to disrupt the established vehicle auction market using the well respected and trusted Motorpoint brand to acquire stock, as well as from other vendors to supply the wholesale market, generating additional revenue and profit.

‘Our plan scales this business significantly.  We are launching developments to our existing online auction site (which sold over 35,000 cars in FY20) which will significantly increase volumes.’

Motorpoint said since reopening on April 12 margins have been ‘strong’ and they are ‘significantly ahead’ of where they were two years ago – a better benchmark, says the firm, than the lockdown hit year.

Strong demand and a focus on getting prices right during this time has helped the firm while it expects the semiconductor issue to help boost the nearly new market in the short term as buyers switch to used cars.

All employees have now returned from furlough, said the group.

Carpenter added: ‘Motorpoint is already well advanced on its journey to become the dominant e-commerce led omnichannel used car retailer in the UK with an unrivalled consumer offering in the nearly new market, coupled with a digital-led auction channel with huge potential.

‘We will continue investing in the business to achieve our medium term goal of at least doubling revenue and growing e-commerce revenue to over £1bn.

‘I believe Motorpoint is the best in class in the nearly new car market with leading national brand awareness metrics, an unrivalled heritage, enhanced digital presence and expertise that will ensure we continue to strengthen our competitive position.

‘We now have an opportunity to grow rapidly as we continue our transformation into an E-commerce led business with huge potential.’