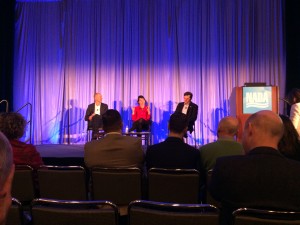 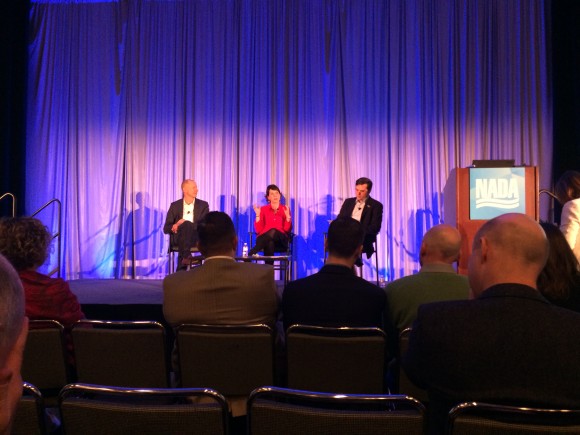 Pietsch and Morris on stage at NADA

Twitter and Facebook’s automotive directors have revealed their tricks for car dealers at the NADA Convention and Expo.

Robert Pietsch, Twitter’s senior director for auto, and Michelle Morris, group director for Facebook, told a packed conference hall that many dealers in the States are having great success advertising on their respective websites.

While we wouldn’t expect them to say anything less, they certainly backed up their claims with some interesting statistics.

Pietsch told dealers that some 500m tweets are sent every day and the network has 284m active users, 80 per cent of whom use their mobiles to view tweets.

‘Twitter users are twice as likely to buy a car in the US,’ he revealed. ‘And buyers are 323 per cent more likely to visit a dealer after seeing a tweet sent by them.’

The Twitter executive said clever monitoring of tweets are key for dealers to make the most of the opportunity the network offers.

‘There is a hashtag that is frequently used called #carshopping which is basically active, in-market consumers tweeting about the fact they are out car shopping,’ he said.

‘Dealers should jump on that and engage, whether that is organically by monitoring those hashtags via Tweetdeck, or by targeting them with a message via Twitter Ads. They are expressing an interest in cars at that moment – and it’s up to dealers to engage.’

He advised dealers that three to four tweets per day were the perfect amount to engage with around 40 per cent of your organic audience. And he added that dealers should see negative tweets as a marketing opportunity – because your response is public and can be seen by everyone.

Morris told the audience that Facebook offers a bigger audience than that of the Super Bowl every single day with 1.4bn users now actively using the platform.

She said dealers need to work hard to ensure their organic content – that which they don’t pay to promote – is relevant, because of some 1,500 posts a user COULD see every day, JUST 300 make the cut thanks to Facebook’s algorithm.

‘We ensure the content our users see is highly relevant,’ explained Morris. ‘Users now watch one billion videos every day on their phones on our platform. And dealers can tap into that because these are real people we know a lot about.

‘Facebook has the detail, the scale and the scope to highly target your message to the people you want to get it in front of. We know when shoppers are in market.’

Morris said the Castle Auto Group in the States has seen a 24 per cent return on Facebook advertising and saved 75 per cent of the cost of direct mail.

‘One dealer invested 500 dollars and sold nine new cars and 11 used off the back of it – that’s quite a return on investment,’ she said.

‘We have a team who can help dealers with their campaigns – all you need to do is reach out.’

A full report on the #NADA2015 convention will appear in the next issue of Car Dealer Magazine.

Sign up to the Car Dealer Conference – at Silverstone, June 9 – to learn tips like this on home turf

#NADA2015: We land in States and reveal details of the Car Dealer Conference & Automotive Expo

#NADA2015: We gather some facts and figures from the workshop sessions