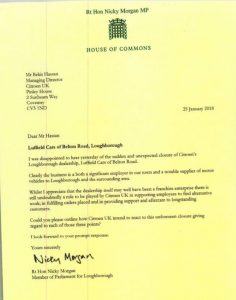 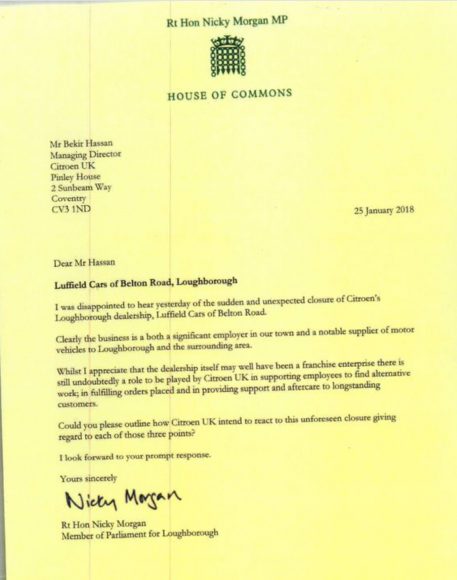 CAR showrooms across England and Wales are facing a £158 million tax hike in business rates over the next five years, with nearly one in 10 showrooms having ‘vanished’ since 2010, according to a detailed analysis of official government data.

And following the sudden closure of Citroen dealership Luffield Cars in her Loughborough constituency, MP Nicky Morgan, who is chairwoman of the influential Treasury Select Committee, has now written to the manufacturer to demand what steps it will take in helping employees find alternative work and how aftercare will be delivered to customers.

New car registrations ended 2017 down by more than five per cent at around 2.54 million vehicles, with car registrations in January falling 6.3 per cent to 163,615 units and the market being hit by a 25.6 per cent decline in sales of diesel cars, according to the Society of Motor Manufacturers and Traders (SMMT). 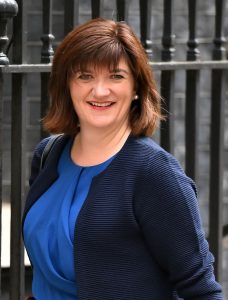 UK sales have slumped in contrast with the rest of Europe. Just four of 27 European nations saw car sales decline in 2017 – and only Ireland prevented the UK sliding to rock bottom of the league table.

During the past seven years, one in 10 car showrooms – a total of 574 – across England and Wales have disappeared from the rating list, having been converted into other forms of use as consumers increasingly use the internet to buy new cars and manufacturers consolidate their dealer presence.

The news comes as car dealership group Vertu Motor warned of a hit to full-year profits after further steep falls in new car sales, with the group – which has 121 outlets across the UK – saying like-for-like sales of new cars tumbled by 13.2 per cent in the final four months of 2017, with a 3.2 per cent drop for used cars.

The new rateable values have already been used to determine the basis of the tax calculations for rates that came into effect on April 1 last year and determine property tax bills for the next five years.

According to Altus Group, new rateable values published show car showrooms across England and Wales saw their property assessments increase by £62.89m – a rise of 12.7 per cent.

The Altus Group data shows that between them car showrooms paid more than £247.37 million in rates for 2016/17, which under the new rateable values will increase over the next five years to £279.06 million a year on average – £158.45 million over five years. 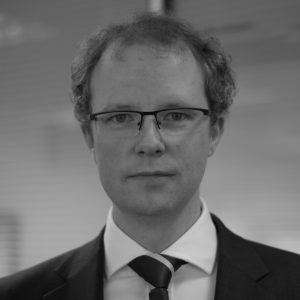 Business rates are among the highest outgoings for car showrooms, along with rent and salaries. Robert Hayton, executive vice-president of business rates at Altus Group, said: ‘Dealerships need to rapidly respond to changes in motoring technology, car usage and ownership models, often impacting on showroom presentation and format.

And he warned: ‘Dealers should expect further increased liabilities if investing. All too often too formulaic an approach fails to take account of the value drivers of modern operators or appreciates the complexity of rental agreements between manufacturers and operators, leaving grounds for an appeal.’

MORE: Car sales in EU countries will slow to one per cent in 2018, says ACEA