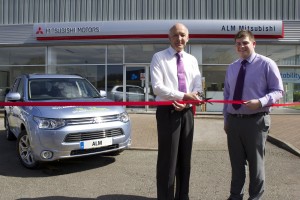 A new Mitsubishi dealer has opened in Macclesfield.

Dealer principal Andrew Merifield, who founded the family-run business in 1996, said: ‘We’re very excited to be joining Mitsubishi. We were attracted to the brand by the growth they have enjoyed in the past two years and the exciting new vehicles that have started coming through.

‘More impressive than anything was the quality of the people I met at Mitsubishi head office, whose knowledge and enthusiasm shone through. It’s a franchise that is focused on the customer and the product, which fits perfectly with our philosophy. We now have a purpose-built facility for Mitsubishi and we’re looking forward to a successful partnership.’

ALM Mitsubishi – which empolys 25 people – becomes the sixth new Mitsubishi showroom to open in the UK in 2015, and with more planned for the coming months, it is one of the fastest-growing brands in the UK. The dealership has taken on a new sales executive and the team will be led by sales manager Anthony Reshad.

Reshad said: ‘We’re delighted to be joining Mitsubishi. There’s some exciting technology with vehicles like the Outlander PHEV, and the L200 pick-up truck will open up a whole new market for us.’

The dealership, which employs 25 people, joins Mitsubishi at an exciting time.

Lance Bradley, managing director of Mitsubishi Motors in the UK, said: ‘Andrew and his team have a well-established reputation for excellent service and we are delighted to have them on board. The growth of Mitsubishi Motors means we are attracting the best dealers from across the UK and ALM Mitsubishi is no exception. We wish them every success for the future.’

MORE: Honda ‘the most reliable manufacturer’ for the ninth consecutive year