Home > News > Nissan gets smartphones to do the manual work 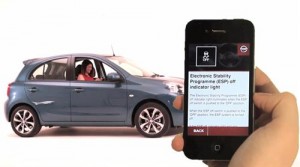 Nissan gets smartphones to do the manual work

The Japanese car maker has created a new smartphone app which sees all of the information contained within the car’s manual squeezed into one software application.

Nissan believes the iManual could be a big hit, helping owners to learn more about their car, after research showed that UK motorists are no fans of their current car manuals.

In a recent online survey, Nissan found that while 57 per cent had consulted their manual, only 13 per cent had used it more than twice – with most stating they quickly gave up after they couldn’t find the information they needed.

Meanwhile, 13 per cent said they kept their manual at home on a bookshelf and 10 per cent admitted they didn’t even know where it was.

Guillaume Masurel, Nissan GB marketing director, said: ‘Car manuals are often the most useful but least used resource and the Nissan Micra iManual is designed to enhance the driving experience and allow motorists to really understand their car further.

‘While automotive design and technology has evolved, the car manual has failed to follow suit and during this digital age we feel there’s a huge opportunity to empower our customers and really enable them to understand what’s happening both above and below their car’s exterior.’