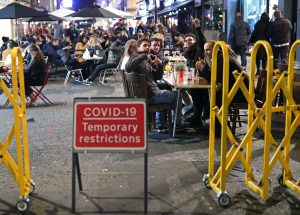 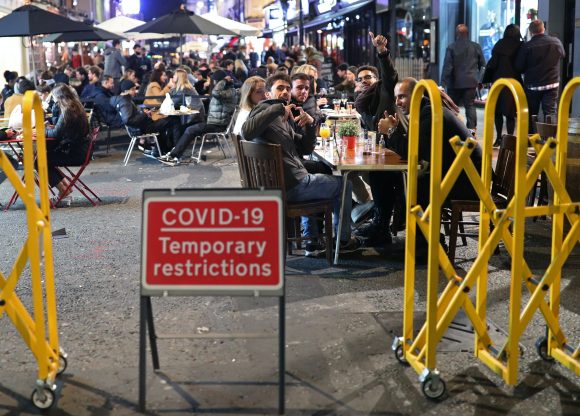 Millions could be banned from mixing under new Covid rules

Millions of people could be banned from mixing indoors and outdoors and thousands of pubs forced to close under new coronavirus restrictions due to be announced on Monday.

Prime Minister Boris Johnson is set to outline a new three-tiered system of restrictions with measures expected to force pubs and restaurants shut across the north of England.

Reports suggest under the top tier no household mixing will be allowed either, which could affect millions of people living in areas with high Covid-19 rates across England.

Almost a third of Scots who voted against independence in 2014 have changed their mind and are either unsure or would vote Yes, according to a new poll.

Record levels also believe that a majority of Scots would vote for independence if a referendum were held today.

The survey of 2,093 people found that 19% of No voters from 2014 now say they do not know how they would vote in another referendum while 13% now back independence.

Of those who voted for independence, 8% would now vote against and 9% are unsure.

The country is at a tipping point similar to the first wave of coronavirus, but can prevent history repeating itself, England’s deputy chief medical officer has said.

Professor Jonathan Van-Tam said the best way to keep transmission low and stop the NHS being overwhelmed was for people with symptoms to self-isolate and get a test, and for people to wash their hands, wear face coverings and maintain social distancing.

In a statement on Sunday, he added: “In our national fight against Covid-19, we are at a tipping point similar to where we were in March; but we can prevent history repeating itself if we all act now.

“Earlier in the year, we were fighting a semi-invisible disease, about which we had little knowledge, and it seeded in the community at great speed.

“Now we know where it is and how to tackle it – let’s grasp this opportunity and prevent history from repeating itself.”

Boris Johnson has held down-to-the-wire Brexit talks with Emmanuel Macron as the clock ticks towards the deadline for a Brexit deal.

The Prime Minister and French president spoke on the telephone Saturday with seemingly just days to go for an agreement on a future trade settlement to be struck.

Mr Johnson told the key EU leader he would “explore every avenue” to secure a deal, but was prepared to leave the Brexit transition period at the end of the year on Australian-style terms with Brussels if necessary.

Both sides have said an agreement needs to be struck in October to ensure sufficient time for ratification.

Leaders across northern England are urging the Government to provide more cash to support areas which face going into further lockdowns or risk “levelling down” the region.

Greater Manchester Mayor Andy Burnham said that accepting Chancellor Rishi Sunak’s financial package would be to “surrender” people to hardship in the run up to Christmas.

Speaking at a press conference with political leaders from Liverpool, Sheffield and Tyneside on Saturday, Mr Burnham said the measures risked “severe redundancies” and business closures.

Duncan Bannatyne: I ‘probably broke even’ with Dragons’ Den investments

Dragons’ Den star Duncan Bannatyne thinks he ‘probably broke even’ on his investments for the programme.

During his decade-long stint on the BBC show, the multi-millionaire invested in 36 business proposals including a falconry company, an ice cream venture and a hat shop.

The Clydebank-born businessman announced in 2016 that he had sold all of his shares in projects pitched on Dragons’ Den.

Speaking on Ruth Davidson’s LBC programme An Inconvenient Ruth, he has now revealed he thinks he either “made a little bit” or was able to break even with the investments.

US President Donald Trump is no longer at risk of transmitting the coronavirus, his doctor has said.

Navy Commander Dr Sean Conley said Mr Trump meets the Centres for Disease Control and Prevention (CDC) criteria for safely discontinuing isolation and that by “currently recognised standards” he is no longer considered a transmission risk.

The memo followed Mr Trump’s first public appearance since returning to the White House after being treated for the coronavirus, but it did not spell out at he had tested negative for the virus.