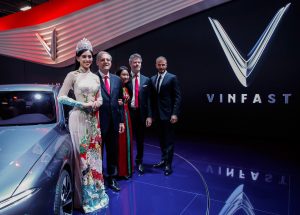 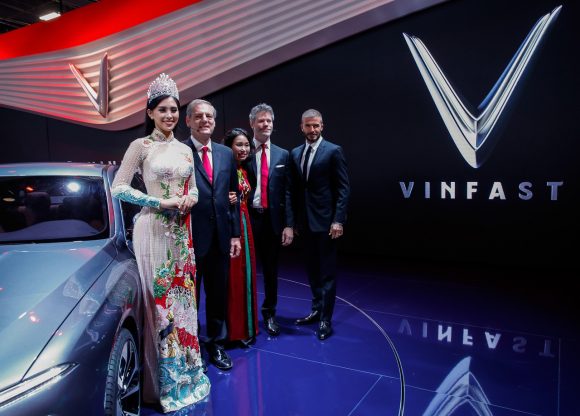 Making a surprise appearance at the French event, the former England football captain appeared alongside Miss Vietnam 2018, Tran Tieu Vy, to help take the wraps off the Vinfast LUX A2.0 saloon and LUX SA2.0 SUV.

In an incredibly awkward exchange, the former Manchester United midfielder uttered fewer than 50 words during his time on stage.

Seemingly unaware of what he was supposed to say, Beckham said: ‘So beautiful. It’s incredible, I mean, to create something in such a short space of time is really, it’s really incredible, you know, it really is. Vinfast is a miracle for Vietnam.

He was then handed a Vietnamese flag and posed with the new cars for photographs.

Just last week, Beckham dodged a speeding ticket thanks to a technicality. He was accused of driving at 59mph in a 40mph zone in West London on January 23.

Despite admitting the offence, the 43-year-old avoided a penalty after he received a notice of intended prosecution (NIP) a day late – an NIP should be issued within 14 days. Beckham was represented at Wimbledon Magistrates’ Court by celebrity lawyer Nick Freeman, known as ‘Mr Loophole’.

At the Paris Motor Show, a spokesperson for Vinfast said: ‘The strategy was to show what it takes competing at the highest level internationally, on the global stage, and David Beckham seemed to fit the bill.

‘Plus he’s also a hugely popular figure in Vietnam, which is important as it’s the home market. The speeding case was a private matter.’

Vinfast is planning to sell its new models across the world after first launching them in Vietnam.