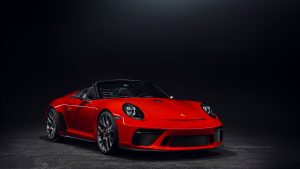 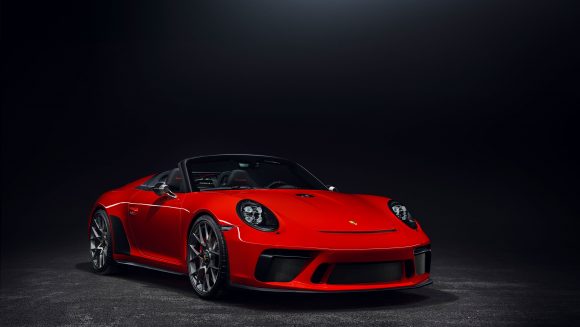 PORSCHE today confirmed that its special-edition 911 Speedster will go into production in the first half of 2019.

It was initially revealed as a concept in June, and the German sports car manufacturer announced at today’s Paris Motor Show that 1,948 units of the Speedster will be made.

The production volume relates to the Porsche 356 ‘Number 1’, which gained its operating licence in 1948.

Decision made: Porsche will start producing a limited run of the 911 Speedster – in Guards Red – in the first half of 2019. https://t.co/y1nN3shKhu#MondialAuto pic.twitter.com/ozQeMSLi5p

It’s the first car to be available with Porsche’s new Heritage Designs Package, which allows buyers greater levels of customisation and personalisation.

The Speedster uses the same chassis as the 911 GT3, while the body is based on the 911 Carrera 4 Cabriolet. Both the bonnet and rear engine cover are crafted from lightweight carbon fibre, while a performance GT-grade exhaust system with titanium tailpipes should provide a dynamic engine soundtrack.

Powered by a flat-six engine, the 911 Speedster produces close to 500bhp and sends drive to the rear wheels via a six-speed manual gearbox.

Rather than a conventional convertible soft top, the Speedster features a lightweight tonneau cover attached via Tenax buttons. This helps keep the car’s overall weight as low as possible.

Unique design touches have been included as well, with features such as the filler cap mounted in the centre of the bonnet and red-tinted daytime running lights helping to elevate the car’s already impressive visuals.

Porsche hasn’t yet disclosed any details regarding the 911 Speedster’s price.