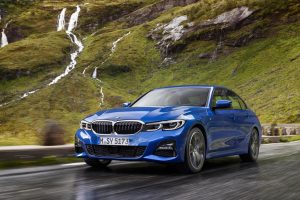 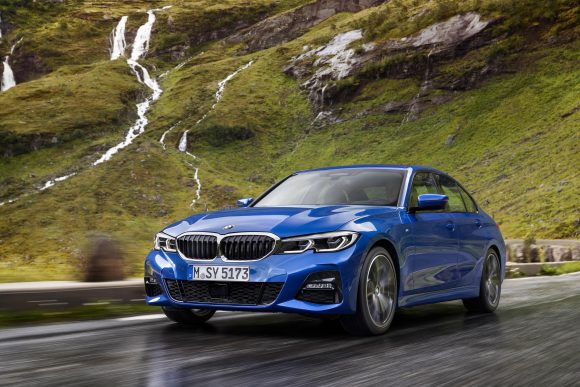 BMW lifted the lid on its brand-new 3 Series at today’s Paris Motor Show.

The seventh generation of the manufacturer’s popular saloon has been completely revised, and is due to go on sale from next March.

With prices starting at £33,610, the revamped 3 Series aims to eclipse the success of its predecessor by offering more space and improved handling.

The new car is now 85 millimetres longer than the car it replaces, as well as 16 millimetres wider, and features a wheelbase extended by 41 millimetres as a result of being based on similar underpinnings as the larger 5 Series.

The large kidney grilles remain at the front of the car but are now framed by ‘notched’ headlights.

Inside, the 3 Series remains as driver-focused as ever. A large central screen dominates the cabin, aided by traditional button controls for functions such as heating and ventilation.

The wait is over. Introducing the new #BMW 3 Series. Find out more: https://t.co/rEboYLsrr4 pic.twitter.com/29aYyA0F2Y

The popular 320d model remains, powered by an upgraded 2.0-litre four-cylinder diesel, and is available with both rear- and all-wheel drive. The rear-driven 320d can hit 60mph in 6.9 seconds, with the xDrive version shaving that to 6.7 seconds.

A powerful four-cylinder petrol will be used in the 330i and is capable of hitting 60mph in 5.6 seconds while delivering a claimed combined fuel consumption of 48.7mpg.

Overall body rigidity is now up by 25 per cent, while the suspension spring rate has also been increased to help deliver a more sporting drive.

The popular M Sport specification remains too, offering a more dynamic look as well as sports suspension, which drops the car’s ride height by 10mm over the regular model.

MORE: The best cars coming to the 2018 Paris Motor Show