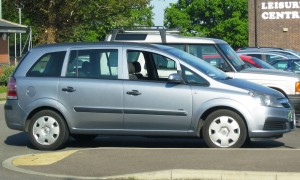 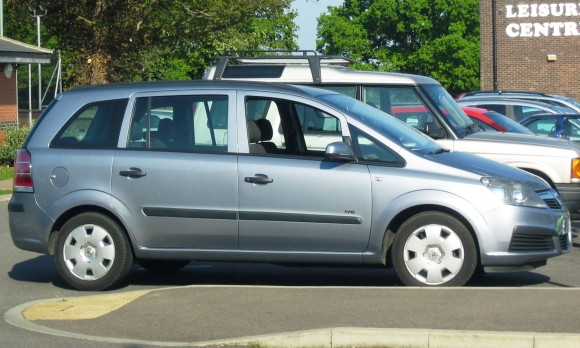 A GROUP of angry motorists have staged a protest against a Plymouth car dealer, who they claim owes them thousands of pounds.

Steve Courage offered to buy and sell cars on behalf of former customers, but they say they have not received any money, the Plymouth Herald reported.

The group stood outside Courage’s current workplace in Ernesettle last week with homemade placards, urging him to pay them what they believe they are owed.

The campaign is led by 40-year-old care worker Natalie Dorney from Peverell, who says she paid £1,350 for a faulty Vauxhall Zafira – similar to the one pictured above – from Courage in 2013.

She returned the vehicle but says she did not get her money back, and last year she sued Mr Courage in the county court and obtained a judgment for £2,000.

The Sheriff’s Office have made several attempts to contact Mr Courage at both his home and work addresses, but official documents show he has failed to pay.

Ms Dorney said: ‘I feel angry that Steve Courage can carry on working without paying up to customers like myself. I am a hard-working single parent to four children and was without a car for weeks until my brother loaned me the money for another. A judge has ordered him to pay me but he hasn’t.’

Another driver, a 30-year-old full-time mother who did not want to be named, obtained a county court judgment ordering Mr Courage’s former business, Courage Car Sales, to pay her £1,031.

‘I bought a car off him and it was knackered,’ she said. ‘I took it back, he kept it for four weeks and nothing had been done. He basically just laughed in my face. I don’t think I’ve got any chance of getting my money back.’

The Herald said it had asked Courage several questions about the claims, and he repeatedly said: ‘(My current employer) has got nothing to do with these county court judgements.’

A Plymouth City Council spokesperson said: ‘Trading standards look into all complaints received, but we would not usually comment on whether any formal investigations are ongoing.’

MORE: Rolls-Royce cars’ image is being tarnished by crisis at its aero engine namesake

MORE: Swansway’s Santa Clause will be on patrol again this year

MORE: Defeat devices could be legal under EU regulations

On SuperUnleaded.com: The eerie way autonomous cars see the world