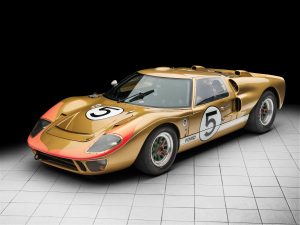 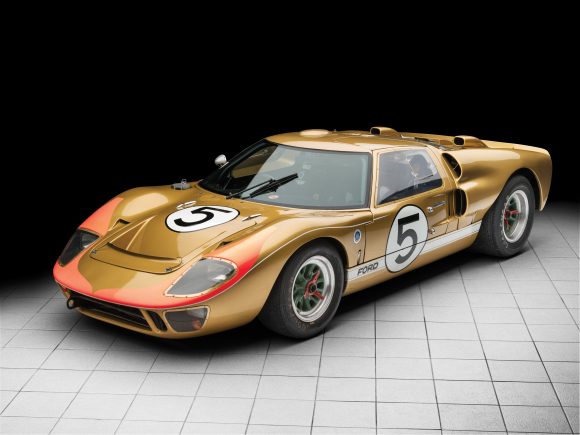 Podium-placing Ford GT40 set to go under the hammer

A 1966 Ford GT40 MK II once raced at Le Mans is heading to auction at the end of the month.

The race car, which achieved a third-place podium position with drivers Ronnie Buckham and Dick Hutcheson behind the wheel, is being offered as part of RM Sotheby’s Monterey sale on Friday, August 24.

Originally painted white with a matte black bonnet, the car was later changed to ‘Kandy Gold’, and also equipped with more robust dampers and springs for the Daytona 24-Hour Continental race on 5 February 1966.

It then continued racing, eventually gaining a third place at the 1966 Le Mans 24 Hours race. In fact, it was the third car in a 1-2-3 finish for Ford, beating the formidable Ferrari P3 cars.

The car is powered by a powerful V8 engine and features a variety of weight-saving features such as aluminium engine heads and a magnesium oil pan. It is also both taller and wider than the original MK I GT40, in order to accommodate larger wheels.

Since its racing days, the GT40 has passed through several owners’ hands and has more recently been faithfully restored back to Le Mans specification. It has also appeared at key motorsport events such as the Le Mans Classic, as well as the Goodwood Revival and Goodwood Festival of Speed.

MORE: Big Mike: Trip on the M6 solved a mystery – and had dodgy Derek bang to rights0