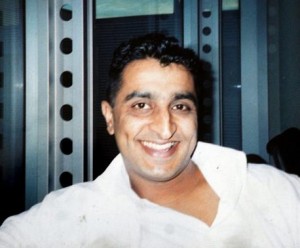 POLICE in West Yorkshire investigating the disappearance of car dealer Sajid Saddique have arrested two men on suspicion of murder.

The 32-year-old father-of-three vanished seven years ago – and detectives this week disclosed they were treating the case as a murder inquiry after uncovering new information.

Mr Saddique, pictured, who lived in the Allerton area of Bradford, went missing while attending a business meeting.

A police spokesman told the Bradford Telegraph and Argus that two Bradford men, aged 52 and 48, had been arrested and were being held in custody for questioning.

Two other men, a 62-year-old from Bradford and a 45-year-old from Halifax, were also arrested this week on suspicion of perverting the course of justice, the Telegraph and Argus said, adding that ‘the older man was released without charge and the 45-year-old bailed pending further inquries’.

Asma Razaq, Mr Saddique’s widow, said she ‘knew in her heart something terrible had happened’ when her husband didn’t return home from the meeting in Shipley in February 2007.

And Detective Inspector Steve Snow told BBC News that no matter how long the police investigation lasted, officers were ‘committed to establishing the truth’ about what happened to Mr Saddique.