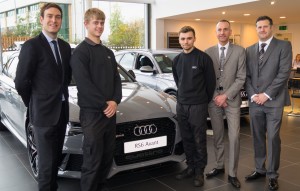 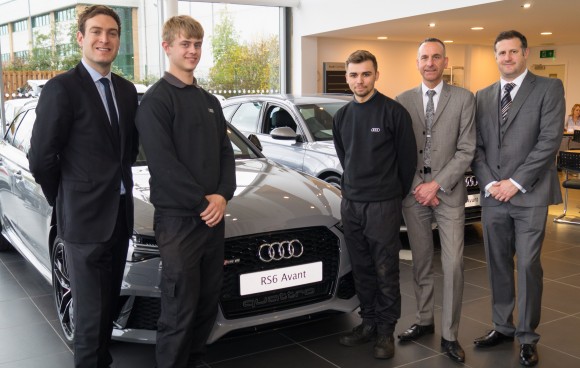 The booming UK automotive industry grew six per cent in 2014 alone – but one of the problems it faces is a shortage of skills.

Gavin White, Autotech Recruit’s managing director, said: ‘Whilst it is great news to see automotive vacancies on the rise with 27,000 new jobs created last year alone, it is worrying the number not being filled due to skills shortages is going the same way.

‘Apprenticeships offer a great solution to this problem and for that reason Autotech Recruit decided to promote this idea within the industry by actively supporting automotive businesses in the recruitment process, financial sponsorship and training of the next generation of vehicle technicians.’

‘To kick off the programme, we teamed up with one of our largest clients, Vindis Group, and in October 2015 our first two apprentices sponsored by Autotech Recruit joined the company’s Audi apprenticeship programme at Bedford Audi.’

Lee Macintyre and Jake Bartlett, both 21, were carefully selected from a number of candidates and are now both six weeks into their 36-month apprenticeship with Vindis Group and Audi UK.

Jake said: I wanted to learn how servicing and repairing vehicles works in the real world and this apprenticeship was a great way to do that. It gives me the best of both worlds, gaining practical skills and theoretical knowledge, whilst being paid for by Autotech Recruit.’

‘It think the apprenticeship is a great start to a career and they should be more widely used in the automotive industry to encourage more people to learn this profession,’ his colleague, Lee, added.

Richard Hillier, head of business at Bedford Audi, is convinced high-quality apprenticeships are the way forward for the automotive industry.

He said: ‘Vehicle mechanics have moved on at such a quick pace over the last few years. The UK motor industry is experiencing some difficulty finding workers who possess the right blend of skills and education to complete technical jobs effectively.

‘With Lee and Jake now on board, we will have a chance to end up with people specifically trained to fit into our business and we can trust to work to the highest standards.’

MORE: Move to a new HQ is a major turning point for Mazda