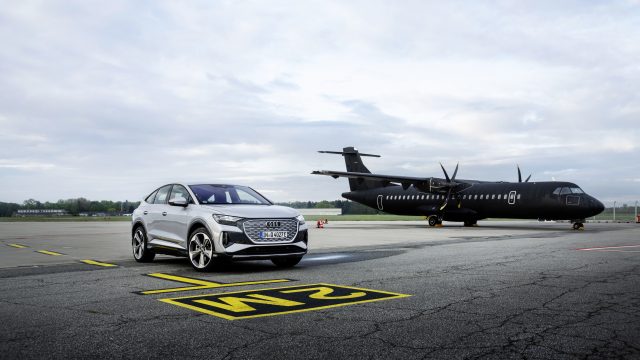 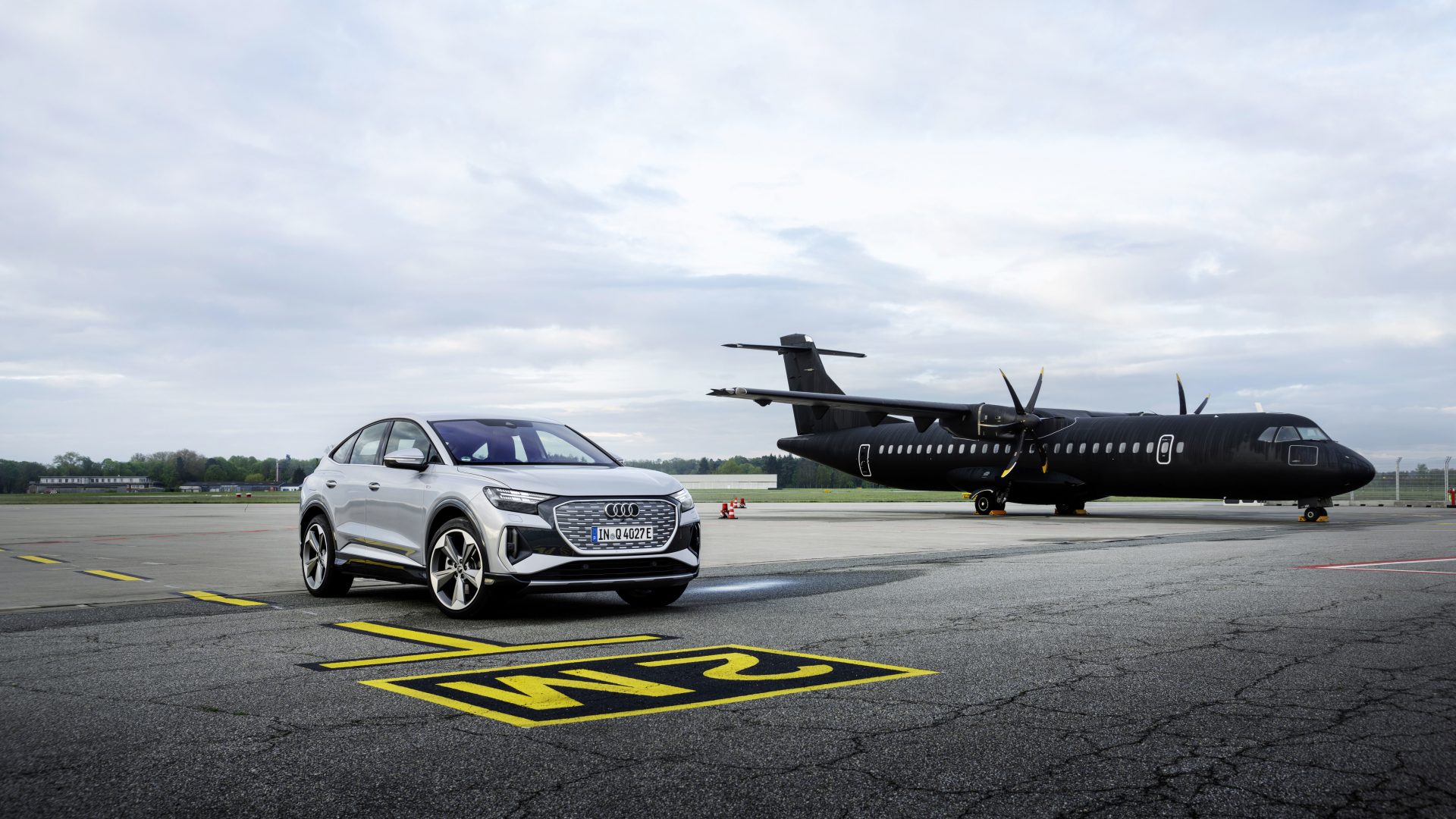 The Audi Q4 Sportback 50 brings extra pace than the standard model, but does it improve the overall package?

To find out, we sent our man Jack Evans to take it for a test drive.

Audi’s Q4 Sportback e-tron is the latest addition to the firm’s line-up of electric cars. Sitting underneath the larger e-tron in the range, it’s a car that shares a lot of components with cars like the Volkswagen ID.4 and Skoda’s Enyaq iV.

But – Audi being Audi – there’s always got to be a more powerful, range-topping version – so this brings us to the Q4 Sportback 50 e-tron, a car which might be a little bit of a mouthful to say but brings a lot of performance and range in a small package.

So can this go-faster Q4 deliver? We’ve been behind the wheel to find out. 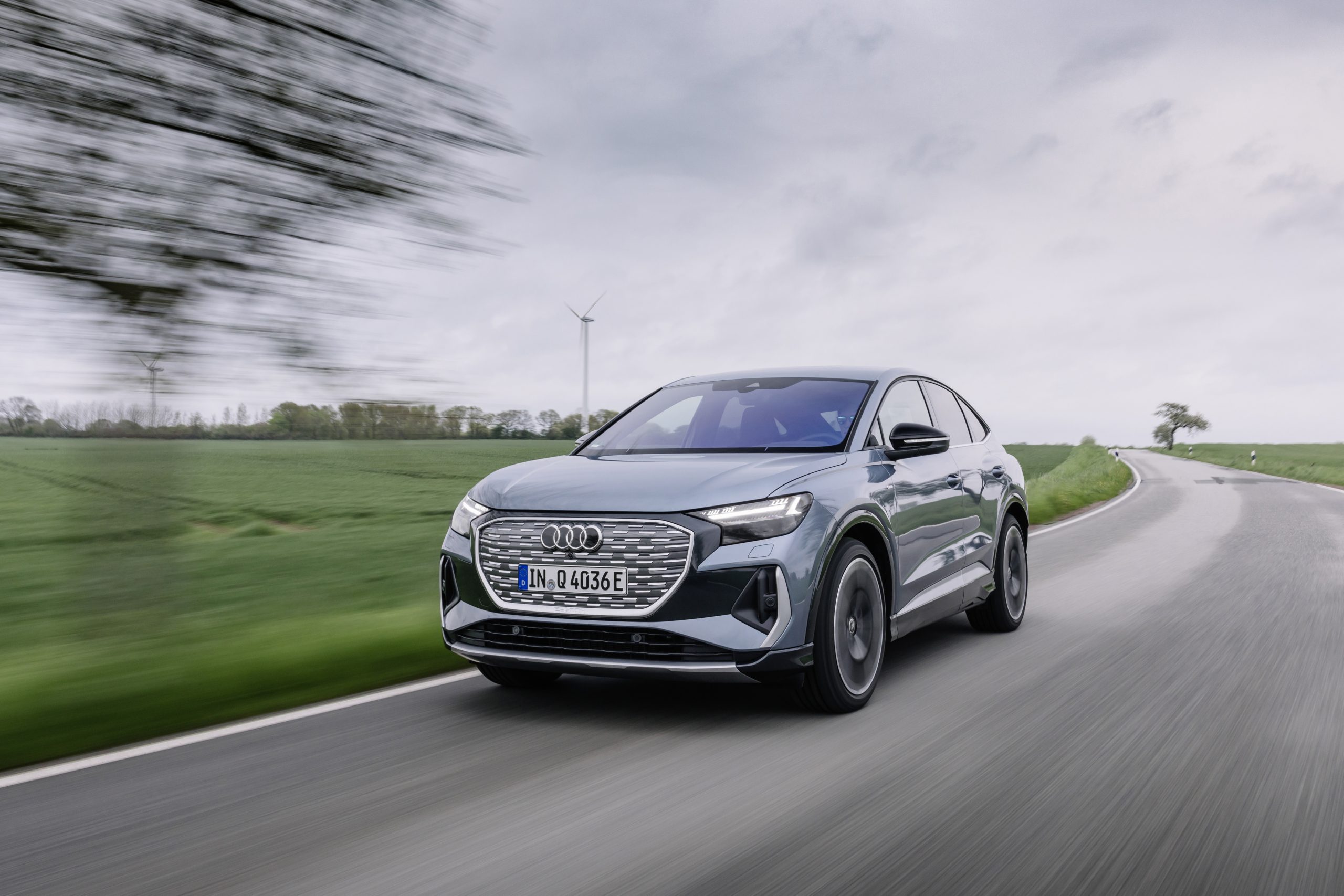 We’ve already tested the less powerful Q4 e-tron 40 and found it to be a polished EV, albeit one which suffers from the competition brought through its Volkswagen Group stablemates.

This 50 is different, namely because it boasts an additional motor on the front axle giving it added punch as well as all-wheel-drive.

There’s not too much to differentiate it from the rest of the Q4 range in terms of design, save for some pretty subtle badges. 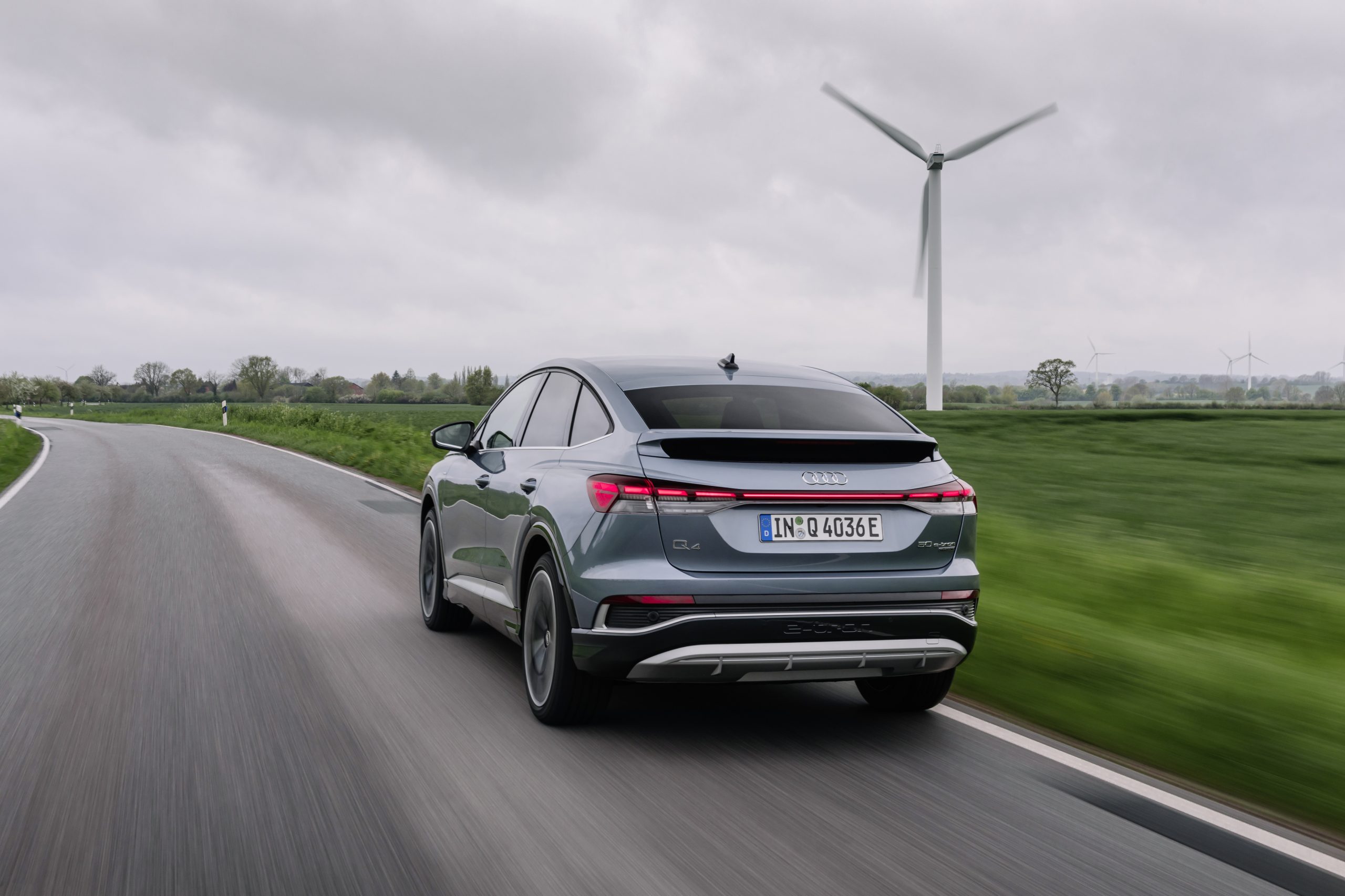 As mentioned, the Q4 50 uses a twin-motor setup which provides more power and all-wheel-drive.

As with all electric cars, power delivery is instant, so the Q4 feels a little quicker than those initial figures would lead you to believe.

In terms of range, the 50’s 74kWh battery should return up to 298 miles between charges when in an S-Line-specification car like our test car.

There is a penalty for that increase in power, however, as the 50’s range is some way short of the 316 miles you’ll get in an equivalently-specified ‘40’ model. 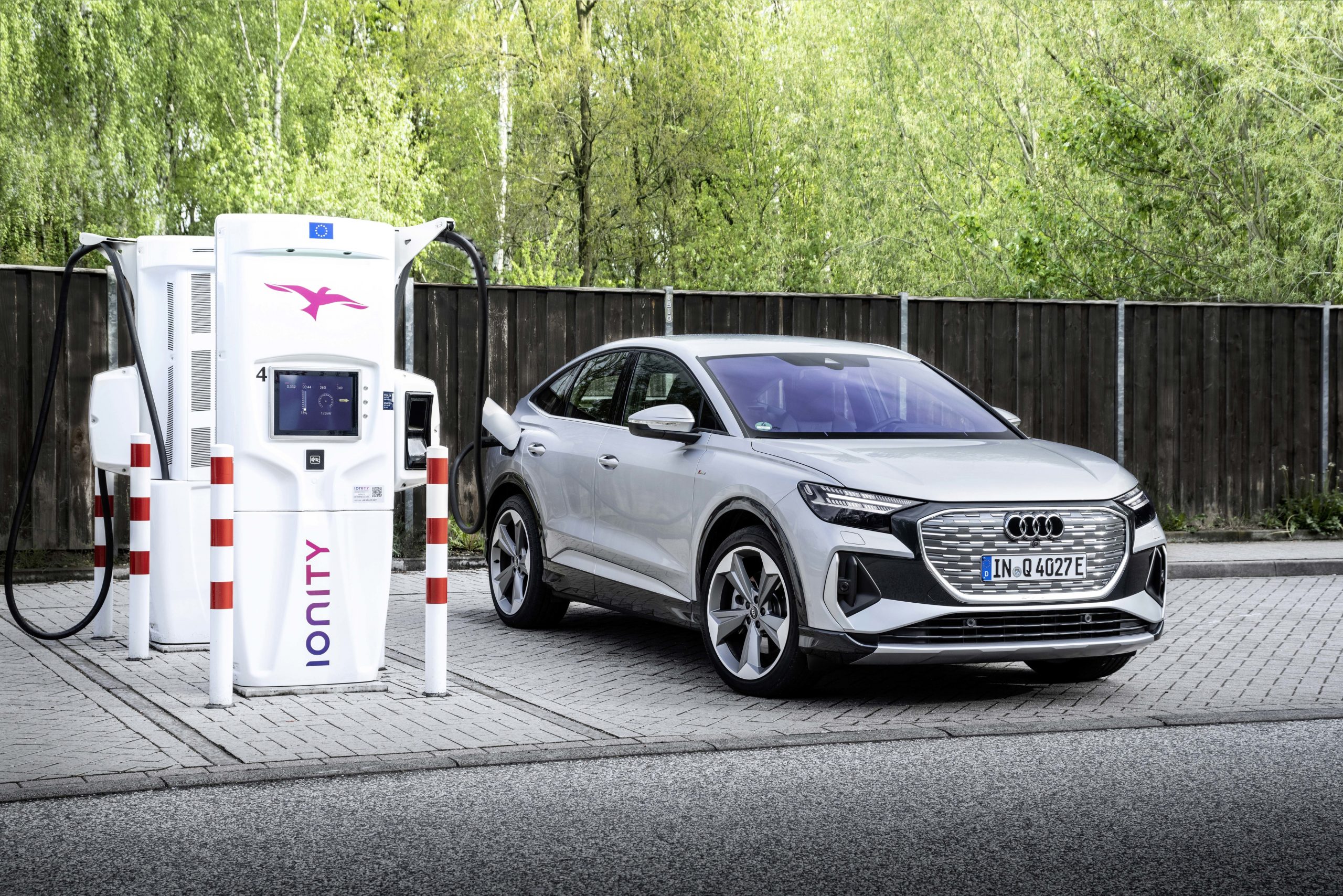 The driving experience you get in the Q4 is predictably hushed and refined as a result of that electric powertrain, though Audi has done well to isolate any real road or wind noise that would impede the otherwise silent cabin.

The steering has a decent amount of weight to it which helps to make the car feel planted, but it’s not so heavy as to make it feel cumbersome around town.

Though at speed the Q4 feels smooth and relaxed, at slower paces the extra battery weight and relatively large wheels combine to make the ride feel unsettled.

Larger potholes really do push the Q4 off its line, while rougher road surfaces patter through the suspension, disrupting the otherwise calm driving experience. 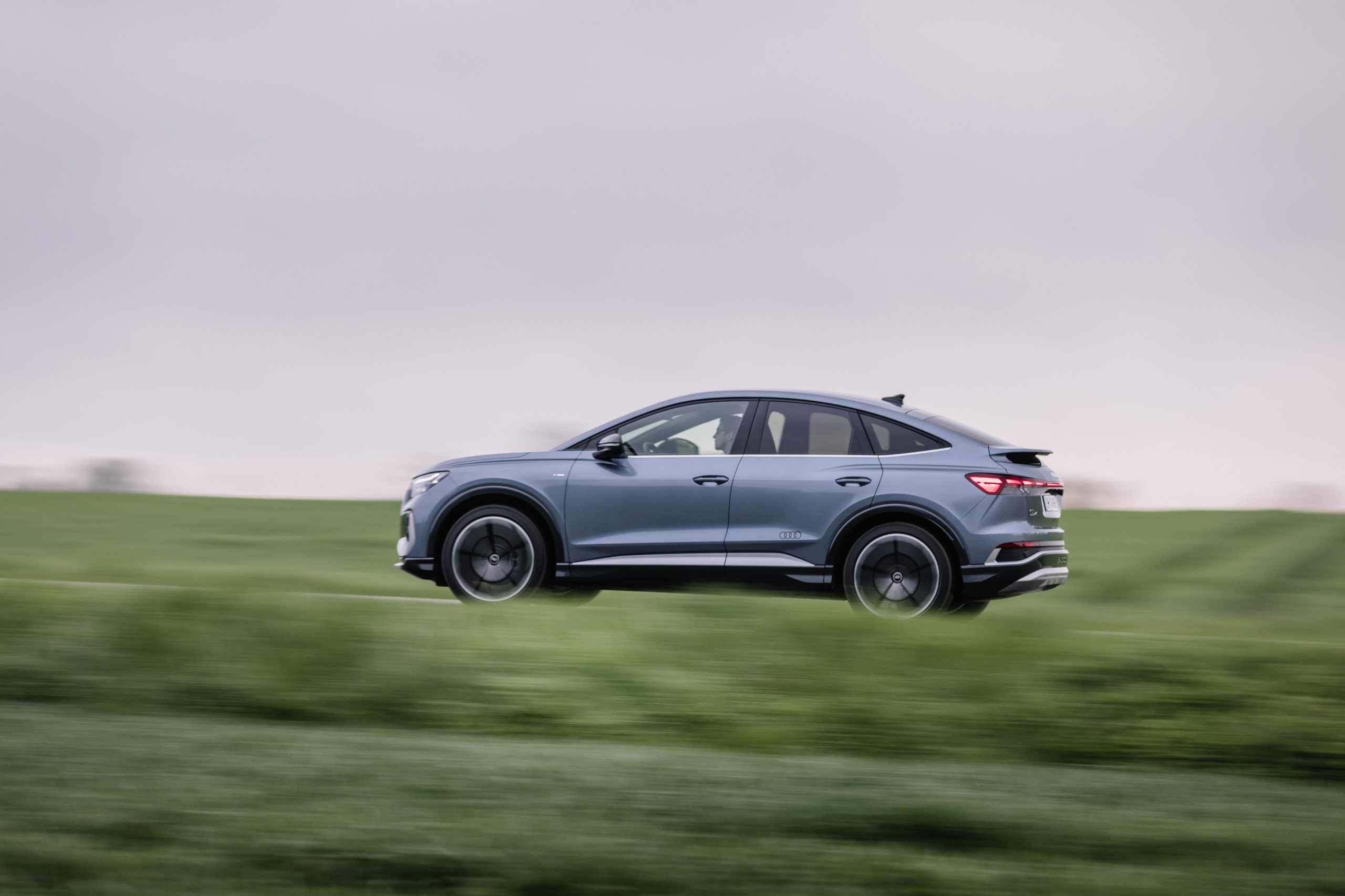 The Q4 e-tron looks particularly space-age, thanks to its LED headlights and striking full-width rear light bar. In fact, the pattern created by the latter when you lock and unlock the car is really impressive and has more than a hint of ‘Tron’ about it.

The Sportback shape, just as it does on other Audi models, includes a sloping roofline which does help to make the car look even sleeker.

However, the small ‘spoiler’ mounted halfway down the roof impedes rear-view visibility, while the lack of a rear wiper means that you’re paying for those sleek looks when it rains. 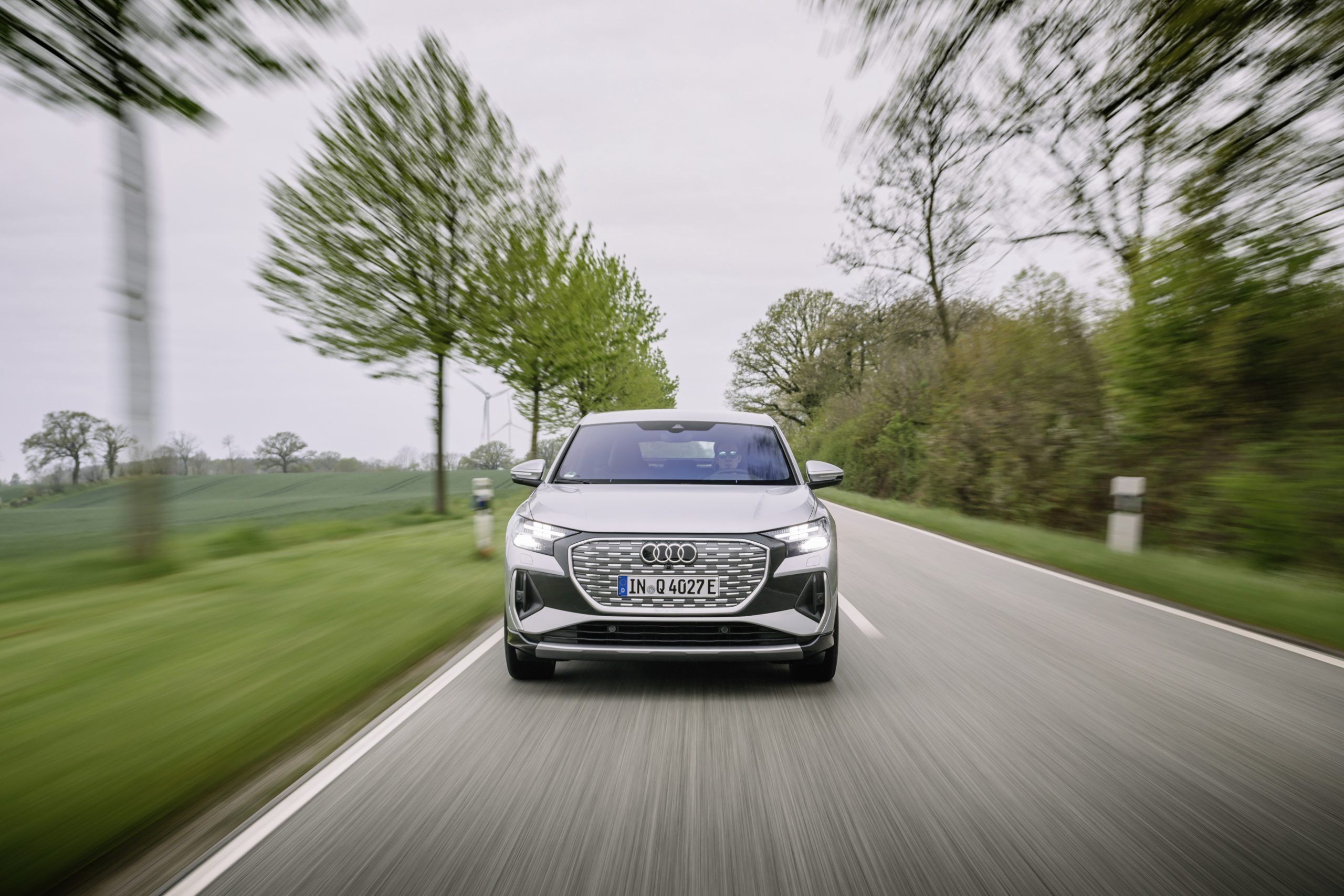 Since it’s sat on Volkswagen Group’s MEB platform, the Q4 has been designed as an EV first and foremost, rather than adapted from existing petrol or diesel cars. That really shows inside, where the Q4’s flat floor allows for a great level of space and storage areas, such as the small area underneath the gear selector.

The general fit-and-finish is good, though the buttons on the steering wheel don’t feel quite up to the standard we’ve come to expect from Audi. They feel a touch flimsy and imprecise and can often require multiple presses in order to get the desired function.

As with other MEB cars, the Q4 doesn’t get a ‘frunk’ under the bonnet, but a clever split-level boot means there’s somewhere to store your charging cables when not in use. 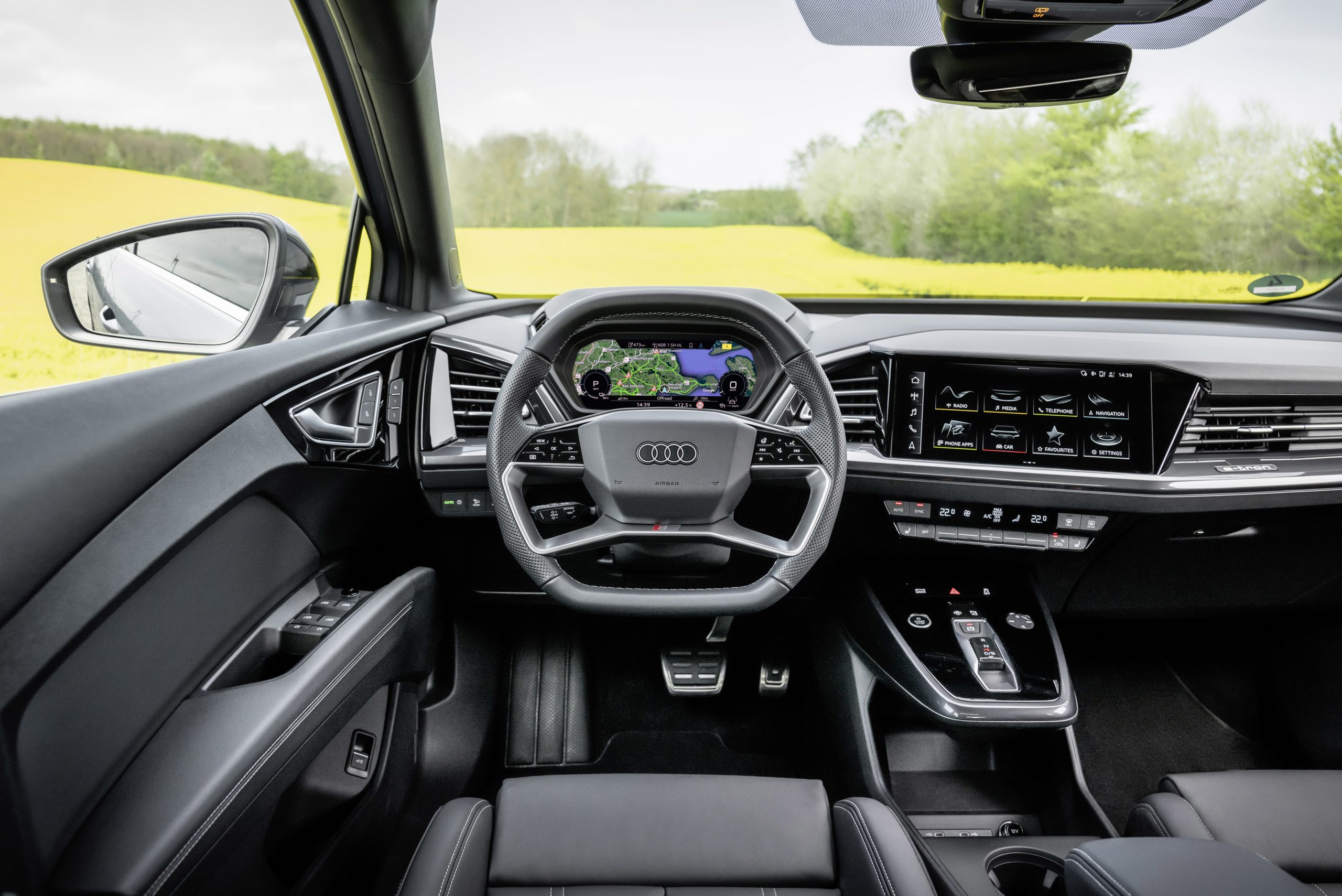 Our Q4 came in S Line specification, which means it gets a variety of sporty functions which give it a more dynamic appearance. You get 20-inch alloy wheels as standard, as well as a full exterior design pack which includes tinted rear windows. Inside, ambient lighting is included alongside full sport seats.

The Q4 also benefits from a 10.1-inch infotainment system which, as we’ve experienced in other Audis, is really clean in design terms and is easy to use, too.

At £285, the addition of the flat-topped and flat-bottomed steering wheel is quite an interesting one and certainly adds a bit of fun to the cabin.

Though the buttons may leave a little to be desired, the actual shape of this wheel is pleasant and more than reminiscent of the ‘Quartic’ wheel found in early Austin Allegros. 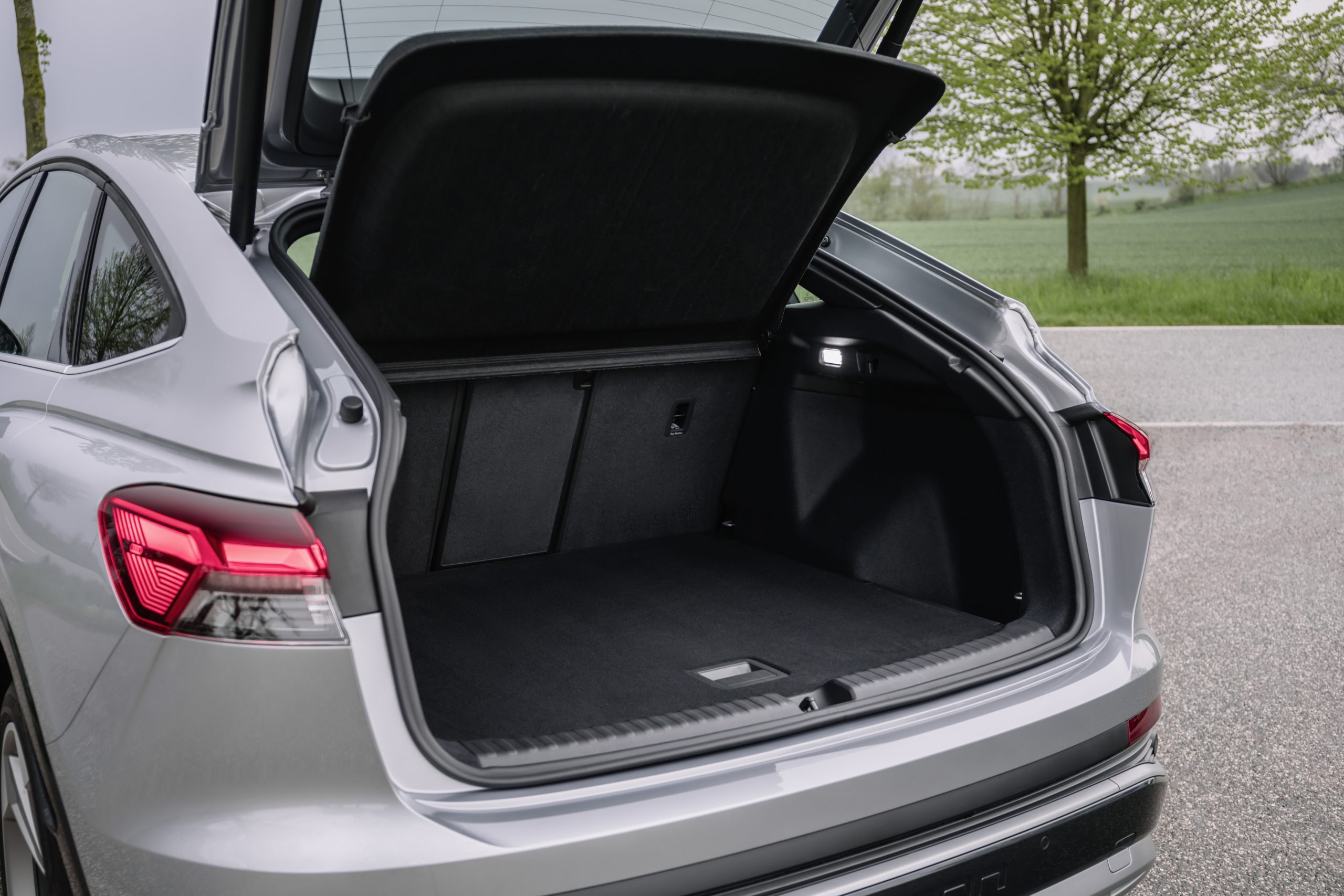 The 50 feels like a fitting topper to the Q4 e-tron range. It’s got that added performance that people will enjoy, while a good level of standard equipment means that it makes more of a comprehensive argument for itself in terms of cost.

However, the bristly ride and reduced electric range do mean that it doesn’t feel quite as accomplished as other Q4 models and it seems as if many customers will rather the additional electric mileage of a lower-powered model as opposed to the small gains in performance brought by the 50’s extra motor.