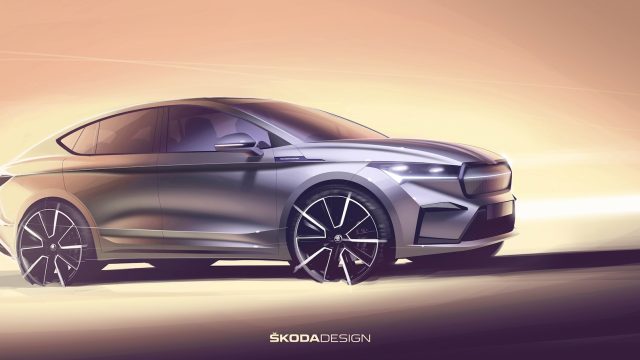 Skoda has released a design sketch of its new Enyaq Coupe iV as it readies the model for launch.

The Coupe is a more rakish version of the Enyaq iV all-electric SUV, and will rival models like the new Volkswagen ID.5 – itself a coupe-version of the ID.4 SUV.

Skoda is aiming for best-in-class aerodynamics and claims the Enyaq Coupe achieves a drag coefficient of 0.234.

It’s likely the Coupe will share the standard Enyaq’s battery and motor hardware of 58kWh and 77kWh and the choice of two- and four-wheel drive.

However, thanks to its more slippery shape, the coupe-SUV could offer a slight boost to the 333 miles currently on offer in the standard Enyaq 80 SUV.

The Coupe might be offered in the same trim levels as the standard SUV, but media reports speculate Skoda could finally launch a hot electric vRS with the Coupe.

If it does, a vRS Coupe would more than likely use the same dual-motor set-up and 296bhp output of the Volkswagen ID.4 GTX.

The Enyaq Coupe iV will be debuted in Prague on January 31.

UK sales could begin by the end of the year and would command a small premium over the standard Enyaq SUV, which is priced from £34,850.