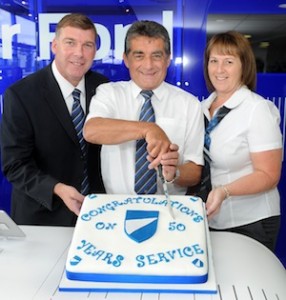 Colin Yates (65) began his career at the Stafford dealership on July 7, 1974 as a mechanic’s apprentice at the age of 15. He later qualified as a mechanic and spent many years in this role, his responsibilities including gas conversions for the Stafford Ambulance Service.

He moved to the position of ‘vehicle progressor’, ensuring vehicles were prepared for sale within company guidelines, delivered on time and to the right standard and specification, maintaining the company’s high standards of customer service.

Yates progressed to managing a team of 10 drivers delivering all over the country before returning to the role of  ‘vehicle progressor and driver’ based at the Bristol Street Motors Business Centre at Trentham Lakes, working across Bristol Street Motors Ford dealerships in Stoke, Stafford and Crewe.

Yates recently won the Driver of the Year title in the prestigious Vertu Motors Masters’ Club awards, which recognises excellence within the Vertu Motors Group.

Colleagues, customers and guests enjoyed cake and a buffet as they marked Colin’s 50th anniversary.

‘He is a popular and valued colleague and everyone was delighted to share in his big day.’

Colin said: ‘I have seen many changes over the last 50 years but have always enjoyed my role, have worked with some fantastic colleagues and met many satisfied customers.

‘I very much appreciate the good wishes of everyone who came along to help me celebrate; I hope they will be there to commemorate the next 50 years!’