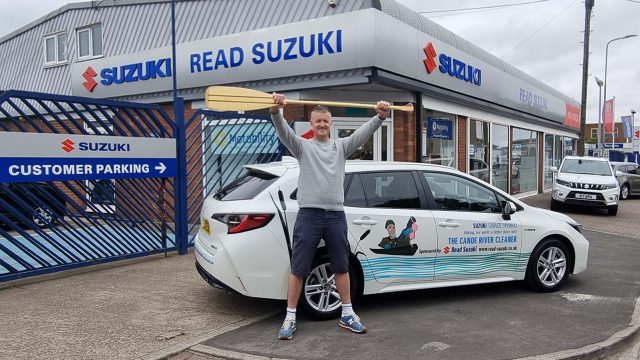 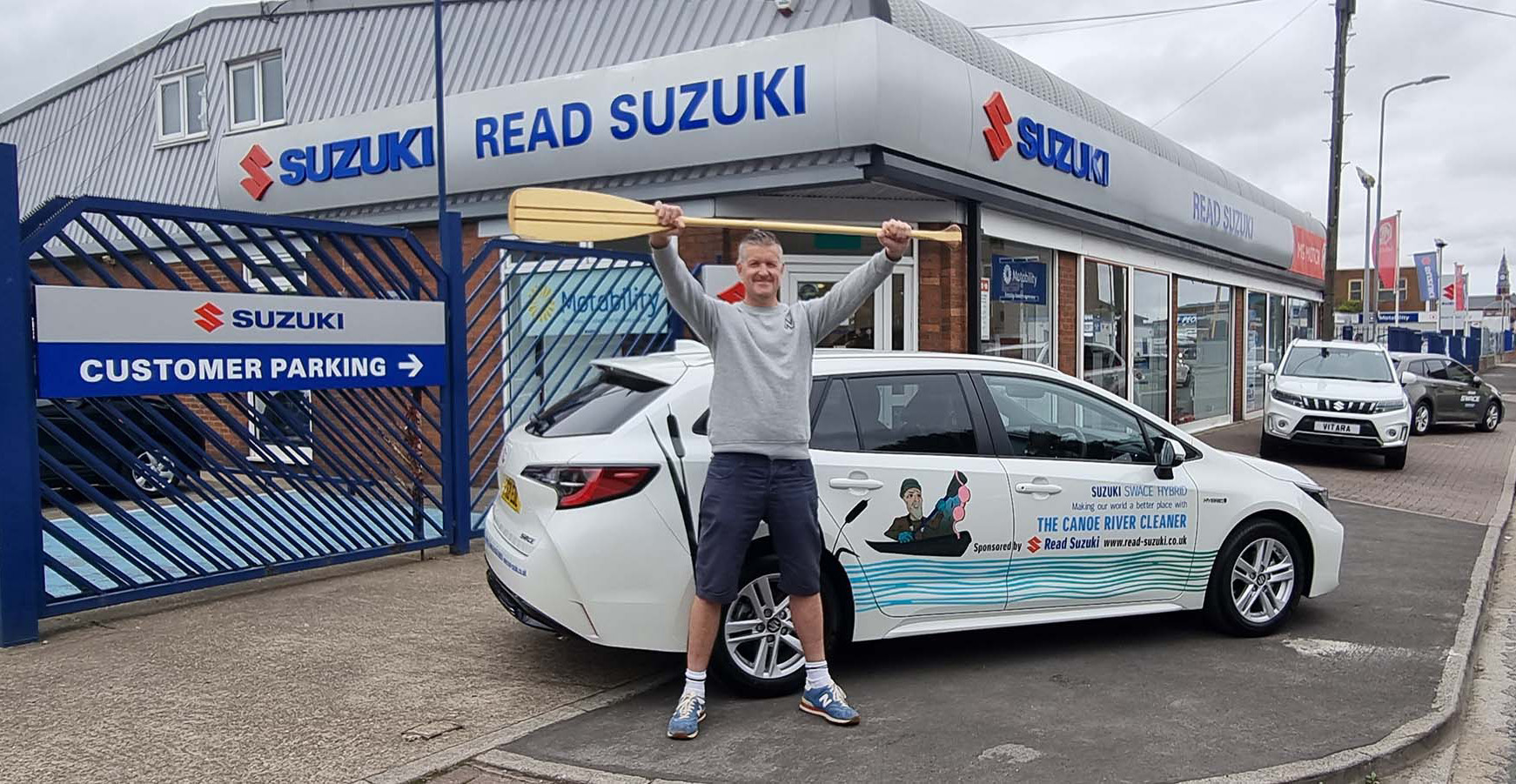 A former car sales manager-turned-environmentalist has told of his delight at a sponsorship deal by a Suzuki showroom that will help with his efforts to clean up a river and more.

Jim Elliott – aka The Canoe River Cleaner – was furloughed last year and started using the time to clean up the Freshney in Lincolnshire to not only help the wildlife but also make it something for residents to enjoy and be proud of.

His sales manager role at IJC Car Sales in Louth was then made redundant this April because of the economic effects of the pandemic.

Since the clean-up effort is an ongoing affair, Jim set up a crowdfunding page, making it a one-year pilot project that will end next March.

He’s been getting cash donations towards his £15,000 target and had been using wife Lindsey’s Hyundai as transport for him, his canoe and equipment, but now Read Suzuki in Grimsby has stepped in with the sponsorship deal, offering him the use of a Swace Hybrid.

Jim, who lives in Scartho, told Car Dealer today (Aug 24) that he was extremely grateful to the dealership.

‘It’s a big gesture and has really taken me by surprise. It’s such a nice, positive thing for them to have done. I’m really pleased,’ he said.

‘As well as cleaning the river in my area, I’ll visit local parks that have got ponds that I can help with the algae problem and dragging trolleys out and things like that.’

The sponsorship deal is part of an ongoing relationship he has with Read Motor Group that will go on to embrace MG and Hyundai, which are also sold by the group.

As well as being seen out and about in the liveried Swace estate and pushing it out on social, Jim will also be doing a Top Gear-style video review of the car for the motor group.

The Swace has been emblazoned with his logo, created by former school pal Damian Quinn, as well as with Read’s details.

And Jim was knocked out by the finished artwork. ‘It looks really good. I was like “Wow! This is a bit more than I expected.” I was blown away by it.’

Fellow ex-school friend Rik Baker will be creating and editing the Swace video plus any future ones as Jim hops into different cars from Read and reviews them.

Jim – who is looking for part-time work as the ongoing river campaign takes up two to three days a week – also emphasised the environmental benefits of the Swace Hybrid.

‘Ultimately, it’d be great to go full electric for obvious reasons, but last night round town I got nearly 80 to the gallon,’ he told Car Dealer.

‘Out on the road and the motorways, it’d be a different kind of animal, but for round town and what I use it for, it’s absolutely perfect.’

The other key thing about the Swace, Jim said, was that it was made in Derbyshire at Toyota’s plant in Burnaston.

‘I think it’s a good selling point for Suzuki fans that it’s made in the UK.’

And he admitted that when he went to collect the Swace from Read Suzuki ‘it was nice to step back into a dealership again’.

Read Motor Group marketing manager Anderlea Butters told Car Dealer: ‘Having heard about the phenomenal volunteering work James Elliott undertakes to keep the river Freshney in Grimsby clean, we were keen to support him in raising awareness of how our individual actions can impact on the world.

‘We’re therefore delighted to be sponsoring James with the use of a Suzuki Swace Hybrid Estate – meaning he can continue his volunteering role whilst further reducing his impact on the environment.’

She added: ‘This sponsorship forms part of an ongoing relationship with James that will see him explore a number of alternative fuel vehicles from the Hyundai, MG and Suzuki ranges in return for honest reviews – detailing everything from how efficient the car is to just how good it is at transporting that all-important canoe!

‘We’re confident this partnership will continue to raise awareness of the vital work James carries out within the local community, whilst highlighting the importance improving environmental sustainability.’