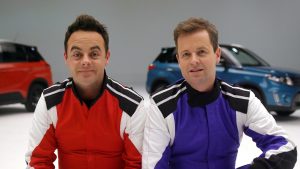 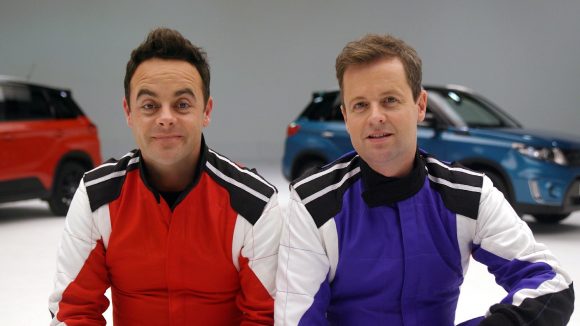 Suzuki could pull support for Ant McPartlin after alleged drink-driving

SUZUKI could pull support for its partner Ant McPartlin following the TV star’s arrest for alleged drink-driving as it ‘reviews its options’.

The 42-year-old celebrity host of Ant & Dec’s Saturday Night Takeaway, on the left in our picture, was involved in an alleged drink-driving incident on Sunday afternoon when he reportedly collided with two cars.

McPartlin and his celebrity co-host Declan Donnelly front an advertising sponsorship deal for Suzuki as part of their prime-time ITV Saturday variety show – believed to be worth around £20m.

However, despite McPartlin’s arrest, Suzuki has refused to comment on whether it will be pulling its support or the duo.

In a statement, the Japanese carmaker said: ‘ITV has taken a joint decision with Ant and Dec’s team not to broadcast Saturday Night Takeaway this weekend.

‘We will be reviewing options for the last two episodes of the series (March 31 and April 7) which would not feature Ant, who is taking time off to seek treatment. We very much hope that he gets the help that he needs.

‘Suzuki will remain in dialogue with ITV and advise media when appropriate regarding the last two episodes of the series. Please note that no further comment is available from Suzuki at this time.’

Police released McPartlin under investigation and it has since been confirmed that he is stepping down from television roles for the ‘foreseeable future’ and will return to rehab.

In a statement, the Metropolitan Police Service said: ‘Police in Richmond were called to Lower Richmond Road on Sunday, March 18 following reports of a road traffic collision involving three vehicles.

‘Officers, London Ambulance Service and London Fire Brigade attended. A number of individuals were treated at the scene for minor injuries only. A child passenger from one of the cars received medical attention as a precaution.

‘A 42-year-old man was arrested at the scene on suspicion of drink-driving after failing a roadside breathalyser test. He was taken to a south London police station for questioning and has since been released under investigation. Inquiries continue.’

A spokesman added: ‘Drink-driving is a selfish and highly dangerous act which puts the lives of innocent road-users at risk, and those caught should receive an automatic driving ban at a minimum.

‘We are calling on the government to introduce a zero-tolerance drink-drive limit, making clear that, when driving, not a drop of alcohol is acceptable.’