Home > News > Thefts of catalytic converters are on the rise 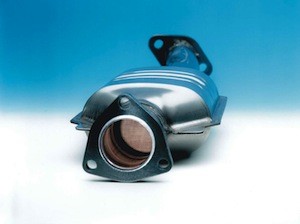 Thefts of catalytic converters are on the rise

AS metal prices continue to rise, reports of stolen catalytic converters have more than doubled over the past three years, according to the BBC.

Between 2010 and the first six months of this year, approximately 25,000 thefts were reported to police forces across the country.

Independent dealer, Jim Reid Vehicles based in Aberdeen, told Car Dealer that last month alone, four catalytic converters were stolen from its local MOT station while a further six were taken from another local dealer.

‘This is because the road clearance makes it much easier for the thieves to crawl under with specially designed cutters. The removal takes around two minutes but the cost to replace can be more than £500 per vehicle.’

According to the BBC, areas such as Bedfordshire and South Yorkshire have seen catalytic converter thefts increase by more than tenfold, while Cheshire, Greater Manchester and Leicestershire have seen thefts triple during the same period.

According to senior analyst with British Transport Police, James Goodson, the illegal trade is fuelled by the rise in the global price of platinum.

He told the BBC: ‘We’ve seen that in the past such metals such as platinum and palladium are affected by the changes in the market. That would be reflected at scrap metal dealer level by the dealer offering a better price for that material.

‘We’ve identified that when there are increases in the price of these metals and materials then we often see an increase in levels of theft reported to us.’

BBC says, in 2011 a staggering 15 vehicles from Jonathan Elvidge’s fleet of delivery vans were stripped of their catalytic converters within 45 minutes, when his depot was raided one night before Christmas.

‘The cost to the business was significant. I mean keeping the vehicles on hire and bringing in new vehicles would have cost us £15,000 to £20,000.

‘But the real cost is the lost revenue in the stores, which we estimate will be in excess of £100,000. So the real risk to the business, was going out of business.

He added: ‘We employ 600 people at that time of the year and all those jobs could have been at risk because we couldn’t get the stock out to the stores.’

A legislation, which came into force on October 1, banned cash payments for scrap metal in order to make it easier to trace thieves and stolen catalytic converters.