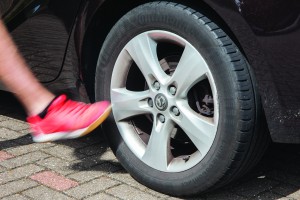 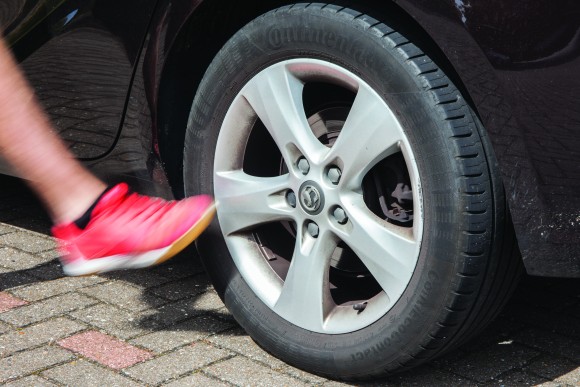 MANY car dealers out there won’t be surprised to hear that tyre kicking is still a huge problem in the UK – but now Halfords Autocentres has done the numbers on it.

A recent survey of 20,000 motorists found that 32 per cent believe that kicking the tyres is an adequate way to test if they are properly inflated.

Halfords Autocentres tyre expert Bob Masters said: ‘It’s an old cliché but we’re surprised to see that many motorists still use this test. Unfortunately, kicking a car tyre will tell you absolutely nothing about its roadworthiness.’

More worryingly, 40 per cent of motorists surveyed said they have no idea what the minimum legal tyre tread depth is, which could be linked to the 37 per cent of respondents who said they had skidded on the roads during wet weather.

Two in five (40 per cent) also said that they have no idea how to read the age of a tyre and 11 per cent admitted to not knowing if their car has a spare wheel or puncture repair kit.

Masters added: ‘Whether you drive a Toyota or a Tesla the only thing keeping your car in contact with the road is your tyres, so it’s vitally important that they are given a thorough inspection to see that they are correctly inflated and the tread depth is adequate.

‘The difference between 1.6mm and 3mm of tread is an extra eight metres of stopping distance in wet conditions and the maximum fine for driving on an illegal tyre is £2,500 – something worth considering when you’re next washing the car or filling up with fuel and could take the time to carry out a quick check.’

MORE: Direct Line Group reveals the Garage of the Future