Car factories in the UK shut down their lines and furloughed staff in April as the coronavirus crisis caused the biggest drop in car manufacturing since the Second World War – with just 197 cars produced.

Car manufacturing dropped a staggering 99.7 per cent as makers turned their attention to producing 700,000 pieces of PPE for the NHS, including face shields, visors and gowns instead.

Just 152 cars were built for export and 45 for UK customers in the month.

The exceptional month follows a particularly weak April 2019, when volumes fell 44.5 per cent year-on-year due to temporary shutdowns as manufacturers sought to mitigate the impact of an expected end of March Brexit.

UK car production for 2020 could fall below one million – a third lower than expected in January before the crisis – and down to lower volumes than 2009. 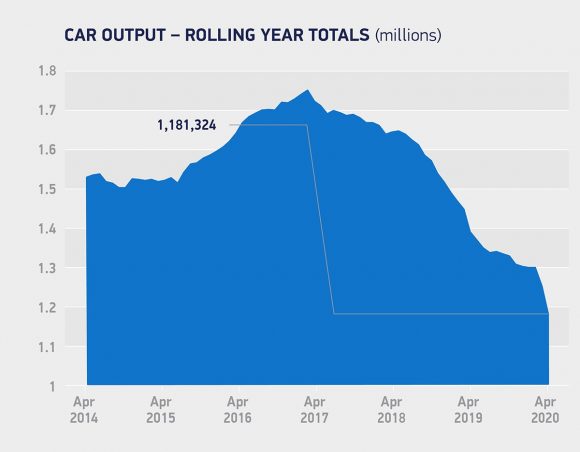 SMMT chief executive Mike Hawes said: ‘With the UK’s car plants mothballed in April, these figures aren’t surprising but they do highlight the tremendous challenge the industry faces, with revenues effectively slashed to zero last month.

‘Manufacturers are starting to emerge from prolonged shutdown into a very uncertain world and ramping up production will be a gradual process, so we need government to work with us to accelerate this fundamentally strong sector’s recovery, stimulate investment and safeguard jobs.

‘Support to get all businesses through this short-term turmoil will ensure the UK’s many globally-renowned brands can continue to make the products that remain so desirable to consumers the world over and, in turn, help deliver long-term prosperity for Britain.’

The 168,000 staff who work in UK factories are now heading back to work as plants begin to start up again, but the predicted loss of output is believed to be 400,000 units.

Rachel Burgess, Autocar deputy editor, said: ‘With the country’s factories suspending vehicle production in late March, these figures are no surprise, but they do show the significant economic impact of Covid-19 on the UK.

‘The UK automotive manufacturing sector supports 168,000 employees, and it’s been encouraging to see some shift their production capabilities to PPE equipment.

‘We expect factories across the country to slowly restart vehicle production in the coming weeks, but resuming full output will take a long time, as plants will have to adhere to new social distancing and hygiene guidelines to protect staff and workers.

‘The industry now faces a challenge to resume vehicle production and limit the damage caused by Covid-19. This will likely need government support to boost demand – with speculation currently on-going about a new scrappage scheme to promote the uptake of environmentally friendly vehicles.’

In a further blow, commercial vehicle (CV) production fell by 99.3 per cent in April, with just 15 units leaving production lines after plants were forced to close their doors because of the global pandemic, said the SMMT.

Year-to-date production fell by 27.6 per cent on what had been an exceptionally weak April in 2019, when volumes plummeted by 70.9 per cent.

Hawes said: These figures, though unprecedentedly low, are not surprising given the exceptional circumstances. However, they do illustrate the incredible challenge facing the UK commercial vehicle sector and, consequently, the wider economy.’

Is a scrappage scheme more likely in the UK now France has unveiled huge support package for its car industry?