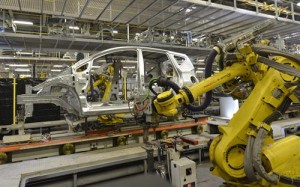 The precise figure was 9.8 per cent with a total of 116,655 units built during the month. Production time was lost to spring shutdowns at some plants.

Demand for new cars in EU continues to increase, with May marking nine consecutive monthly rises.

Mike Hawes, SMMT chief executive, confirmed: ‘UK car manufacturing fell 9.8 per cent in May, as some plants instigated spring shutdowns during the month.

‘The prospects for the coming months and years, however, are still bright; new UK-built models will benefit from growing demand across Europe, while significant investments in UK manufacturing operations are moving closer to production readiness.’