THE UK’s used car market was stable in the first quarter – down just 0.6 per cent, according to new figures released today by the Society of Motor Manufacturers and Traders.

A total of 2,020,144 transactions took place, with segment and powertrain trends seen at the end of last year continuing into 2019 and March the busiest month of activity.

Demand for hybrid, plug-in hybrid and pure-electric cars continued to grow – up 30.7 per cent – with 32,272 models changing hands. Of these alternatively fuelled vehicles (AFVs), hybrids experienced the largest growth – up 34.2 per cent, with pure electric rising 4.8 per cent to 3,067 units. However, AFVs took just 1.6 per cent of all transactions in Q1, with conventional petrol and diesel making up 98.3 per cent of the market, the fuel types up 1.1 per cent and down 3.6 per cent respectively.

Reflecting trends in the new car market, superminis remained by far the most popular used buy, with 676,395 of these smaller cars finding new owners – an uplift of some 6,000 units on Q1 2018. The dual-purpose segment, meanwhile, enjoyed the largest growth, seeing demand rise by 6.1 per cent. Black was the favourite colour choice ahead of silver/aluminium and blue, with pink the least popular of all.

‘Consumers are benefiting too, as more of the latest, safest and cleanest vehicles filter through to second owners. If we’re to accelerate this shift, and meet shared ambitions on air quality and climate change, a long-term government commitment to supporting take up of the latest technologies in the new car market will be essential.’

AA Cars chief executive James Fairclough added: ‘Traditionally, second-hand dealers have to work harder to tempt buyers to forecourts in the new year, so a slight downturn in used car sales in the first quarter shouldn’t come as a big surprise. 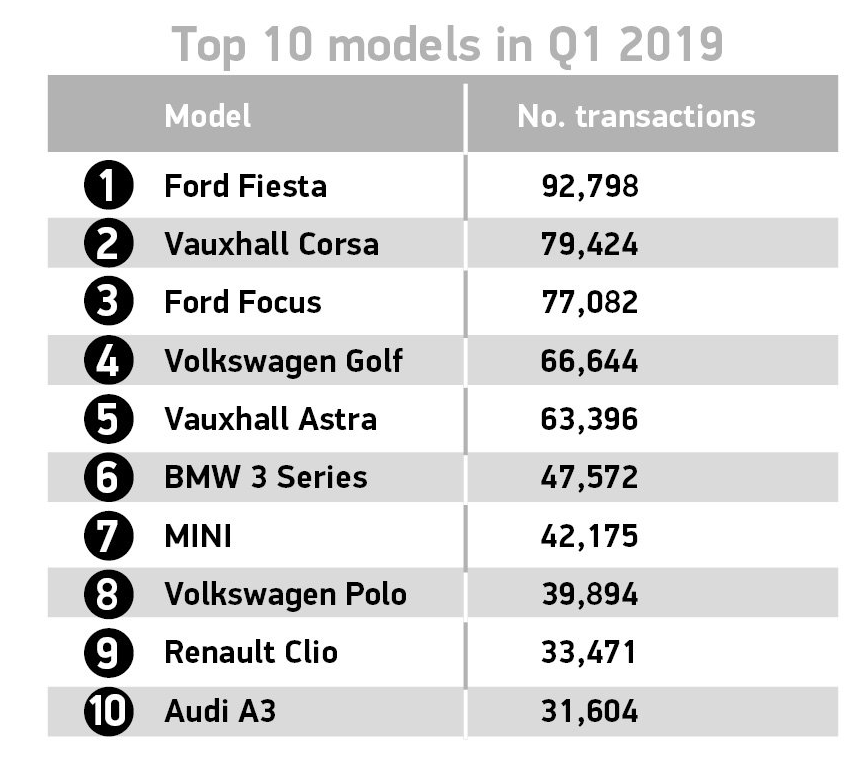 ‘In this current climate of pervasive uncertainty, a slight drop in sales actually speaks to the overall resilience of the market.

‘The market continues to be supported by the ongoing success story of second-hand alternatively fuelled vehicles. Second-hand electric and hybrids are particularly enjoying the moment as technological advances continue to trickle down to the used segment, meaning that consumers looking for a bargain can benefit from increased range and the convenience of more available charging points.

‘Our own figures support this upward swing in used AFV sales, as searches for hybrid vehicles on the AA Cars site have jumped by 12 per cent since January 2019.’

Meanwhile, Ian Plummer, director at Auto Trader, said: ‘Despite consumer uneasiness, fuel-type confusion and economic uncertainty, the used car market has remained stable, in what is the largest quarter of the year. However, when you drill down further into fuel type, a different story is told.

‘Although diesel transactions on the whole are down, they have not dropped significantly, despite the confusion that has flooded the industry in recent months. For many people, diesel is still a very practical choice that suits their circumstances, and is as efficient in terms of emissions as the latest petrol engines. In fact, our search data shows that interest in diesels remains robust, and encouragingly the cars are continuing to hold their value with an average retail price in April of £14,276.

‘What we can see is momentous appetite for alternatively fuelled vehicles. And our marketplace data reflects this too: the number of people searching for AFVs/EVs on Auto Trader has increased 40 per cent from 2017.’