Drivers are being urged to book their MOT tests ‘immediately’ to avoid being caught up in a deluge of tests expected in October.

MOT tests will now be required for all cars, motorcycles and vans again after the extension was put in place on March 30.

But there are fears that if drivers don’t act immediately and only book their MOT once their six-month extension has ended, the UK’s MOT testing network could struggle with a deluge of MOTs tests later this year.

‘I’m very pleased the six-month extension has been lifted and we fully support the government in this, but there are reasons to be concerned,’ Independent Garage Association (IGA) chairman Stuart James told Car Dealer Magazine.

‘We are urging consumers to book their test immediately – even if their car already has the six-month extension applied.’

James expressed concerns that if drivers don’t act straightaway, there will be problems from October.

‘We’ll be facing a situation where garages will be tying to test the usual number of cars expected for the month of October, as well as getting through a six-month backlog of cars,’ James said.

And while the lifting of the extension is good news and one that the IGA ‘fully supports’, James said he’s worried that there’ll be a large number of unroadworthy cars on the UK’s roads. 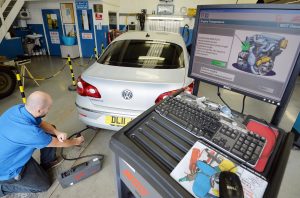 Between now and August 1, a million motorists could still receive the extension and be driving dangerous cars for another six months – that’s on top of an estimated 1.6m ‘dangerous cars’ that have already had their MOTs extended.

James also said he felt the extension had been too long and that ‘six weeks would have been sufficient’.

But he did reveal that the nation’s garages are expecting ‘to burn the midnight oil’ to get through the backlog and the usual demand for MOT tests in October, especially as many garages ‘have incurred debt’ during lockdown.

James’s views are backed up the RAC and its latest survey, which has found that 70 per cent of its network of approved garages anticipate significantly more demand in October.

Adam O’Neill, RAC head of motoring services, said: ‘In many ways this is an ideal time for people to get their cars booked in for an MOT – whether they’ve already taken advantage of the automatic extension or not.

‘Our garages have yet to see demand return to pre-lockdown levels, but if drivers wait until the autumn they’ll be trying to arrange MOTs at the same time as hundreds of thousands of others.

‘Understandably, demand for MOTs and servicing fell sharply after the coronavirus lockdown as garages closed and the government instructed all of us to stay at home.

‘But as the lockdown has started to be eased, drivers may be left wondering whether now is the right time to be getting their cars checked over, or whether making use of the MOT extension is the best course of action.’

O’Neill added: ‘The message from us is simple – our garages are fully open and all are operating to our Covid-19 code of conduct to help keep customers and staff safe.

‘And with seven-in-10 offering a collect-and-return service, reducing interaction with garage staff, drivers needn’t be put off from getting MOTs, servicing or other maintenance work completed.’

With mandatory MOT tests only resuming from August 1, a new survey has also revealed the MOT check items that motorists worry about the most.