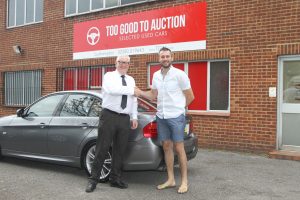 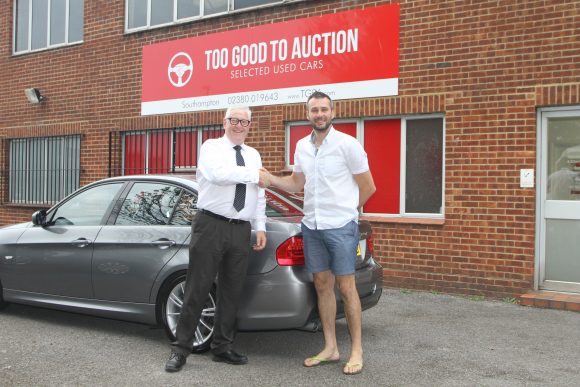 100 Days of Trading Up: Begs, blags and borrows pay off!

CAR dealer founder James Baggott was proud to hand over a cheque for £14,209 to Great Ormond Hospital recently. As we reported a few days ago, the money was raised during a ‘trading up’ challenge staged to help celebrate the 100th edition of Car Dealer, which was published last year. Here, James tells the full story of how he went from £100 to more than £14,000 with a little help from his friends…

AFTER an intense period of buying and selling for our 100 Days of Trading Up challenge, you might be wondering why things went very quiet all of a sudden.

Well, that’s mostly my fault, but finally I can report some good news – we’ve sold the last car. For those of you feeling a little in the dark – and to be honest I can’t blame you, as my last update was quite some time ago now – indulge me a little as I recap.

You may recall that to celebrate our 100th issue I decided to embark on 100 Days of Trading Up to try to make as much money as possible for Great Ormond Street Hospital.

When I say ‘trading up’, what I really meant was begging as many dealers as possible to let me have a part exchange for a lot less than it CAP-Cleaned at, so I had the biggest chance possible to add as much cash to my pot after each move.

To start our challenge, those lovely people at Lookers promised to find me the first car. Very soon, MD Nigel McMinn called to say he’d set me up a beauty at his Northern Irish outpost, Charles Hurst. A few weeks plus a budget airline flight later and I was sat chatting to the site’s boss, Colin McNab, about the starting motor.

After a tour of the amazing facility he oversees, he handed over the keys to my first car in exchange for 100 of my pounds.

That sturdy silver Lexus LS430 was packed with gadgets and enough buttons to keep even me entertained for many, many minutes. It had cooling seats, blinds and a sat nav that made Windows 95 look modern. But everything worked, it was comfortable and, most importantly, was worth a hell of a lot more than the 100 quid I paid for it.

After a very strange night crossing back from Ireland to Liverpool – a journey I don’t wish to repeat any time soon – I was already on my way to my first trade.

The good people at Perrys had offered to take the Japanese Mercedes in exchange for a 10-plate fridge-like car. By fridge, I mean it could have frankly been anything, purely a commodity to be traded on as quickly (and I mean as quickly) as possible. 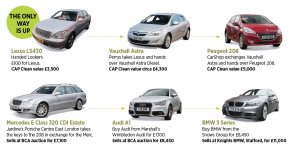 The deal was a good one. For the Lexus, the kind Perrys people gave me £3,500 and I drove away the 69k-mile car, which shall remain nameless, worth around £4,300. CarShop answered my call for assistance to take it off my hands quickly and told me to drive from the Perrys Preston site straight to their sprawling dealership in Northampton. So that I did and before the day was out I’d turned my Lexus, worth £100 to me, into a 13-plate Peugeot 208.

After that, the Trading Up game slowed, and the little French car sat unloved in our office car park for a few more weeks than it should have done while I desperately tried to find another swap. Eventually, one materialised.

Richard Hollis of Jardine told us to head to his firm’s Porsche centre in east London. Waiting for me was a stunning trade – they whisked away my Peugeot and swapped it for a 56-plate Mercedes E Class 320 CDI Estate. Not wanting to slow the process down – and knowing I’d got a cracking trade with the Merc – I decided to head straight to BCA Blackbushe with the German and get it through the block as quickly as possible.

Blackbushe boss James Gibson did us proud, getting the wheels refurbished and the parking dents sorted by Penningtons, followed by a class valet from on-site experts Motorclean. The results were incredible and it showed in the return – I banked a whopping £7,100, a full £1,100 more than it booked at.

With a wedge of cash burning a hole in my pocket I knocked on several virtual car dealer doors and eventually Marshall Motor Group CEO Daksh Gupta answered. He scoured his group’s extensive collection of used cars and came up with a winner – an Audi A1 on an 11-plate.

With just 36k on the clock, the little Audi was up for sale at the group’s Wimbledon outlet for £10,990, but we were going to move it on at trade prices. I offered the Audi to a few contacts but came up short, so with the 100-day deadline looming, I decided to stick it through the block again at BCA.

With its owner’s manuals and two keys all still present, it sold for £8,450. The race was now on to find a final car to buy at trade – but this time I planned to flog it retail to make the most possible for GOSH. Enter, stage left, Snows Group director Neil McCue serving up a lovely BMW 325D M Sport.

With just 66k on the clock and an impressive spec, it was the ideal last car. I picked it up from the group’s used car set-up in Southampton, Too Good To Auction, where sales manager Patrick Worth had cleaned it especially. 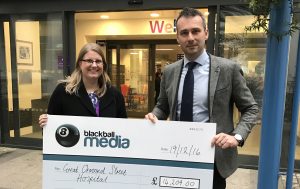 Scratching my head as to how to get the most money for it, I decided to head back to where it all began and chat to McMinn at Lookers. His firm had recently snapped up the Knights BMW and Mini Group for £27.2m, so I thought they’d be perfectly placed to retail the 3 Series for us.

And being the true gent he is, McMinn duly obliged and sent our BMW for sale at his Stafford site, where it went for a whopping £11,000! Not bad going from £100, I’m sure you’ll agree.

By the time the cheque had been issued and cleared it was Used Car Awards time, so we decided to try to top up our grand total for GOSH with a charity raffle at our big event. The well-oiled award-goers gave generously – adding £3,209 to the pot on the night.

So, after six months of blagging, begging and borrowing, I made my way to Great Ormond Street Hospital to hand over a rather comedy-sized cheque for the grand total of £14,209.

When I got there, fundraising executive Jenny Pearce told me: ‘Thank you for all your hard work. I’ve reserved your donation towards some replacement theatre equipment so that our surgeons can continue to provide word-class care.

‘For GOSH to continue to provide a safe and efficient surgical environment, the operating theatres urgently need new equipment. The money you have raised will go towards this.’

Thanks to everyone for their help with this worthy cause – and if you’ve got any ideas about what we should do next, get in touch. You can email me at [email protected] or tweet me @CarDealerEd.

On SuperUnleaded.com: Idiot In Pick-up Gets Stranded At Sea