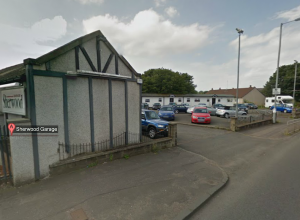 The vehicles were taken during a break-in at Sherwood Garage, Baillieston Road, near Mount Vernon, between 23:00 in Sunday and 01:00 on Monday.

Police have appealed for anyone with information to come forward and say the entrance to where the car keys were kept had been forced.

Det Con Graham Harries said: ‘There is a local bar close, to the garage, and I am appealing to anyone who may have been in the pub or in the area around the time of the theft.

‘It’s possible people came outside to smoke a cigarette and may have seen activity at the garage. I am appealing to anyone who has any information and knowledge to get in touch with us.’