USED car dealers in Edinburgh are offering the best value to buyers, with affordable prices combining with low ages and mileages, analysis by AA Cars, the AA’s used car website, has revealed.

In the Scottish capital, the average asking price for a used car is £11,223, with the average car listed for sale having just 24,946 miles on the clock. Used cars for sale are on average 4.2 years old, and the combination of these factors propelled Edinburgh to the top of the best-value league table.

Paisley, near Glasgow, has the lowest average used car age, at just four years, and finished third in the overall ranking for the best-value places to buy a used car. The average price of vehicles for sale in Paisley is more expensive than in Edinburgh at £11,589, but the average mileage is also low at 24,495.

Luton, in Bedfordshire, is home to the least expensive vehicles at £7,741, but the price is brought down by the average mileage, which at 65,402 is the highest among the 40 towns and cities analysed by AA Cars. 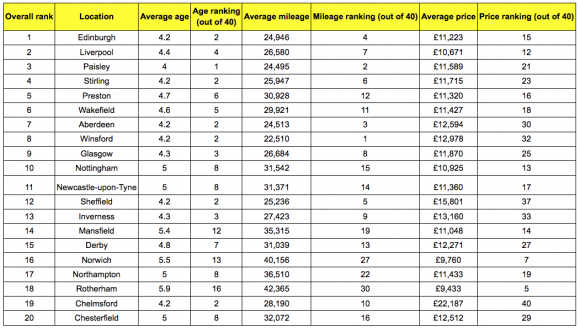 The research also showed how diesel cars’ share of the used market has fallen steadily during the past 12 months.

Diesel has become less popular in recent years, due to additional taxation, the implementation of Clean Air Zones and proposed bans on these vehicles in some parts of the UK.

Edinburgh has seen the biggest decline in the percentage of diesel cars available on the market. Diesel vehicles accounted for almost 45 per cent of the used market at the end of 2018, but a year later they represented 37 per cent.

In Derby, diesel cars accounted for almost 50 per cent of the used car market, but there has been a 16.9 per cent decline in 12 months.

James Fairclough, CEO of AA Cars, said: ‘Our snapshot of the used car industry shows there is some regional variation when it comes to finding a used vehicle, and there are some areas of Britain where drivers can get added value out of their purchase.

‘Online portals such as AA Cars have made it far simpler for drivers to assess what vehicles are on offer in their local area and beyond, helping them secure the best deal possible. Travelling a few extra miles to buy a car can be particularly beneficial for making savings, or finding less widely-available models.’

MORE: Ford Puma crowned What Car? Car of the Year for 2020